There are so many films based on books. You, too, might want to turn a novel into a movie. This complete guide offers 11 screenplay-writing tips to adapt a book into a movie.

So, you’ve written a novel. Now you want to turn your book into a movie or a TV series. What could be easier? 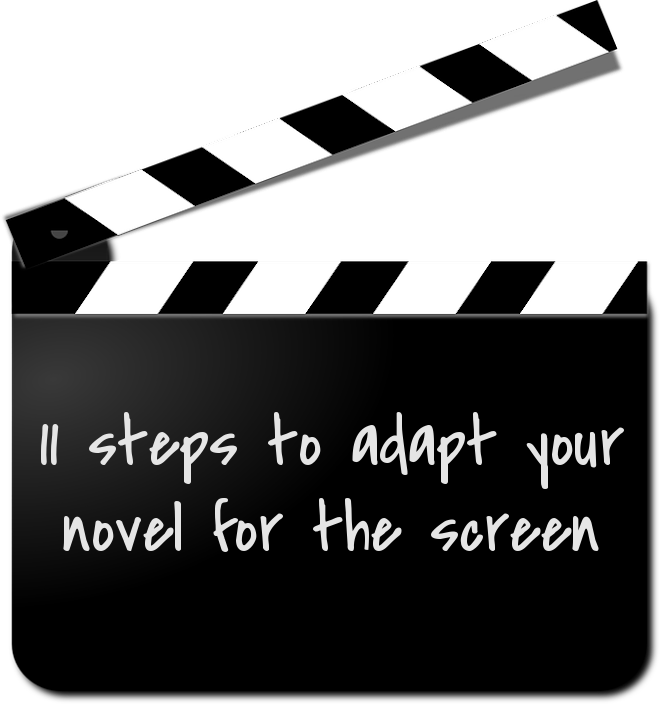 Follow this guide to adapt your novel into film.

How can I turn my book into a movie?

Book to film adaptation process: here are 11 steps for adapting a book into a screenplay for a movie or TV show.

And that’s how to adapt a book into a screenplay.

Step 1. Picture the visuals for the screen

The first thing about a book to film adaptation is to stop thinking about words. One of the challenges of adapting a novel to film is that people consume the story differently. Film is all about the visuals. Yes, there are words. Yes, there are sound effects, too. But movies are all about what the viewer views.

If your book is centered around personal introspection or conversations around a dinner table, it might be challenging to adapt it for film. Indeed, it might not be worth adapting the book for film. Not every book makes a good movie.

If you can’t picture the visuals, your audience won’t get it, either.

Book to screen adaptations: if you can’t picture the visuals, your audience won’t get it, either.

This takes some time. It takes time because you have to watch a lot of movies and read a lot of books.

The payoff is you get to watch a lot of movies and read a lot of books.

Pay attention to a few aspects of each pairing:

This is the pitch to moviegoers. In one or two sentences, you must get someone to think: “Ooh, I want to see that one!” This is your logline, and it is around this description that all your writing should be developed. This is where you find your story, so take your time.

This summary should state three things:

To give you an idea, here are five great examples of loglines from famous movies. Just for fun, can you identify the movies? The answers are below, at the end of the article.

Step 4. Write your novel out as an outline

This might be the easiest step in the book to film adaptation process. If you created an outline as a first step to writing your novel, you’re already done. Congratulations!

For each point, make note of its utility on screen:

Some points won’t have any onscreen utility. Inner dialogue doesn’t (usually) go into a movie, for example. But don’t lose those points. Keep them in your outline. You might want to find other ways to convey some of that meaning. When you write your screenplay outline, you might want to work those items into different points.

Step 5. Optional: hire a screenwriter to adapt your novel for film

If you plan to hire a screenwriter to help you write a truly amazing script, this is likely the best time to do so. Bring your book manuscript and the outline with you. We’ll be happy to help adapt your book into a screenplay.

To turn a novel into a TV series or a movie, the first thing to adapt is your thinking.

Step 6. Convert your novel outline to a screenplay outline

I know that hurts. Take your time to absorb it. I’ll wait.

Don’t even think of starting to write until you have this down. You would be wasting a huge amount of time and effort. I am sure you’ve heard the carpenter’s motto: measure twice, cut once.

Get this right, so that you have to write your screenplay adaptation only once.

In fact, it might be a good idea to spend more time perfecting the outline than writing the screenplay itself.

One of the harder parts of the outline will be threading through the plot all the emotional developments of the main characters. The plot is “the” story. But the real story, the one moviegoers react to, is the emotional trajectory of the protagonist. Make sure that your outline fully develops that journey.

A treatment is a narrative of the film. It is what the outline looks like when being told as a story. You might not need this step; you can write a great screenplay from an outline.

So why bother writing a treatment?

A treatment might typically run 10-20 pages. You don’t have to emulate James Cameron’s treatments, which are so long they have been dubbed “scriptments.” The treatment for The Terminator ran over 40 pages. 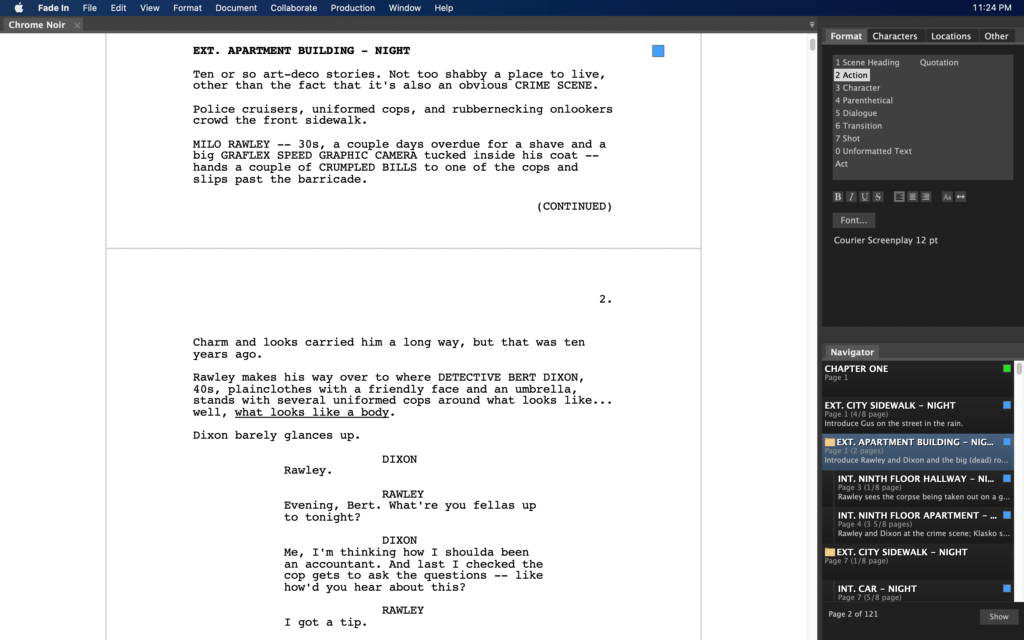 Screenshot: Fade In screenplay writing software to adapt a book into a movie format

Your focus should be on storytelling, not on formatting. A book to screen adaptation is tough enough without distractions. Get screenwriting software to take the mechanics out of formatting. It’s a great timesaver and an even greater way to reduce distractions.

Our screenwriters use Final Draft, Fade In and Movie Magic.

Final Draft is the best-known screenwriting software. It will do everything you need it to do. But it does cost $200 to buy, and you’ll have to pay for updates down the road.

Movie Magic is the in-between priced software, at $125. But they charge you for updates, too. One of our writers uses it for writing speed, then transfers to Fade In to clean it up and complete the script.

Fade In is an inexpensive alternative that does pretty much anything you would want it to. At $80, with free updates, it’s worth the investment. PC Magazine backs up our opinion:

“Fade In costs less than half as much as competitor Final Draft (an industry standard), but they have similar features. If you’re not ready to pay the premium cost for Final Draft, Fade In is an excellent alternative.”

In fact, Fade In makes a great case for having more features.

All three software have been used in countless Hollywood productions, so you really can’t go wrong with any of them. It doesn’t look like Movie Magic offers a free trial, but both Fade In and Final Draft do – so you can get a feel for them before committing.

There are plenty of free screenplays online for you to read. Why not be strategic and read some screenplays that were book to screen adaptations?

You have worked hard and waited a long time to finally start writing.

On the plus side, you’re committed. No backing out now.

Remember to keep the writing tight. This might actually be tough for you as a novelist, especially if you feel that you wrote your novel tight to begin with. When adapting a book to film, you’ll remove all that fluff that you thought was tight before.

To illustrate, Brad Johnson describes the first scene of The Dark Knight:

“Notice how we don’t see the criminals showing up for the heist. There’s no round of greetings and introductions, or unpacking of equipment. It jumps right into it with the bank job having already started. Any earlier than this, and the audience starts off bored, waiting for the real point of the scene to begin; any later than this and the audience might be confused about what’s actually going on. This scene HAD to start here in order to accomplish the point(s) of the scenes.

“And now, let’s look at the end of the scene…

“It’s a great character moment for The Joker, and gives us our first glimpse of how deranged he is. But then the scene cuts as he drives away in the bus. We know that the grenade is going to explode; that the poor bank manager is doomed. But we don’t stick around and watch the explosion. Why? The reason is simple: we don’t need to. The point of the scene has been accomplished.

“It’s time to move on to the next part of the story.”

To turn a book into a movie, you might not have to cut much of the dialogue. But you’ll probably have to cut a lot – maybe even most – of the scene descriptions. You might also have to cut some backstory and even write some minor characters out of the film.

This bears overemphasis. You need to focus on the story. Separate the characters that are important from those who are just fillers. If the character doesn’t drive the story, wave them goodbye. This goes back to the “get in late and leave early” motto.

Book to film adaptations: If the character doesn’t drive the story, wave them goodbye.

One of our writers, Mark, was adapting a book into a movie for a client. A character was breaking into a high-security office and hacking a computer to re-arrange some emails. In a later chapter of the book, he was doctoring the evidence from his own computer and sending another email to divert attention and cover his tracks. This second part would have taken a minute or two of precious screen time. To adapt the book for the screen, Mark had the character tell a friend in dialog what he had done to cover his tracks. That saved a whole scene, since Mark wrote it into dialog that was already happening.

On the other hand, you might need to add a character or a scene to move the story forward in place of some inner dialogue that won’t work in film or some slow action that would take too much screen time.

For instance, many things you’ve written into your novel might need to be explained out loud. That requires someone to explain them to. Faithful readers of this blog will know what a huge Doctor Who fan I am. The Doctor’s companions play this very important role. Without them, the Doctor would have no way to explain to screen viewers so much of what could simply be narrated for readers into a book.

Pay attention to the beginning and the ending of your story. When adapting your book for the screen, you might have to change one or the other. Or both. Yes, sacrilege! That messes up your “perfect” novel.

But focus on the story. What would make a really great story on film? Often, that means jumping into a place you don’t get to right away in the book. And often it means ending in a different way.

Step 11. Get feedback on your screenplay adaptation

Ask people to visualize the movie version as they read your freshly-written script. Now you’re into territory you are surely familiar with from when you sought feedback from beta readers. Seek feedback and edit until it’s a stellar script.

If you want professional feedback, our screenplay writers can offer a high-level review. We’ll read your screenplay and make suggestions on how to improve it for production. We’ll provide examples whenever appropriate. You’ll typically get a few pages of comments – solid, practical advice.

Adapting books into film is a lot of work

In some ways, it is almost more work to adapt a novel into film than it is to write the screenplay from scratch. Yes, you have the story. But you have to un-learn so much of it. You have to re-think so many aspects. You have to re-envisage the story. And even for creative people like authors, that’s not always easy.

But if your story is good, it can be very rewarding to turn your book into a movie. And we are happy to help you structure and write your book to film adaptation. 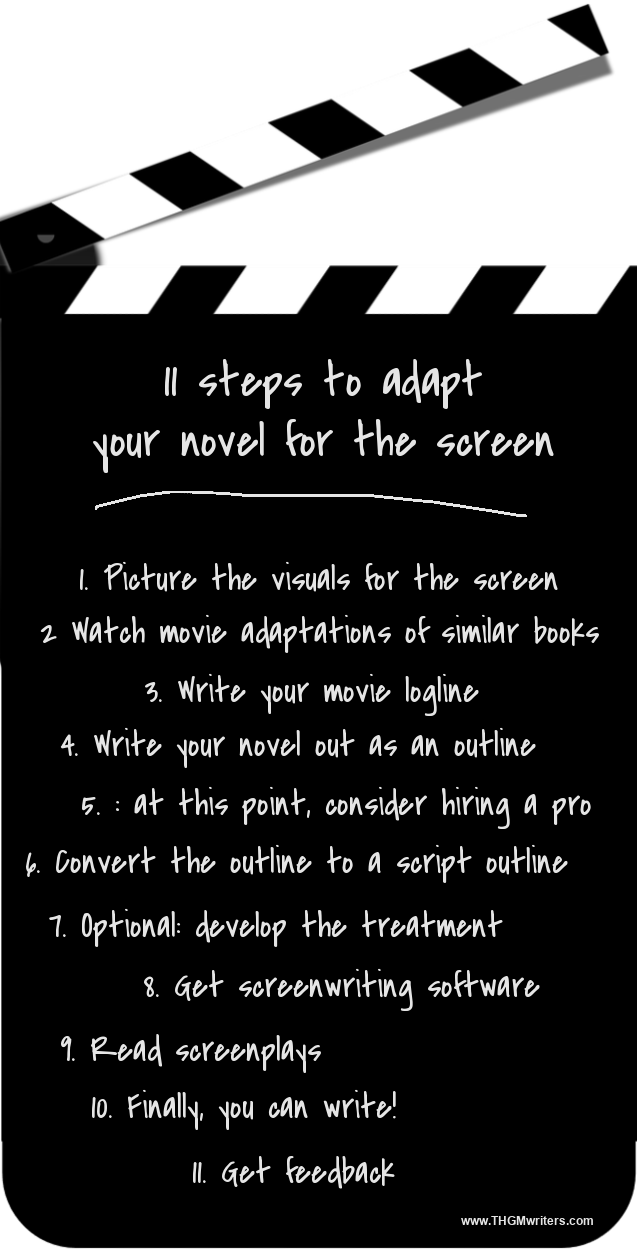 Do you know what all these titles have in common? They are all book to movie adaptations, and are great examples of how to adapt a book into a movie.