Another client of THGM Writing Services publishes her book. The Post Traumatic Stress Disorder Fallacy (Part 1), by Nattanya Andersen, pulls back the curtain both on PTSD and on the secrets of the mental health industry.

If you ever wondered whether doctors, hospitals and the pharmaceutical industry prefer to cure you or to keep you sick and keep treating you, Nattanya Andersen has an answer for you, at least in the field of mental health.

Keeping you sick and treating you is clearly more profitable. 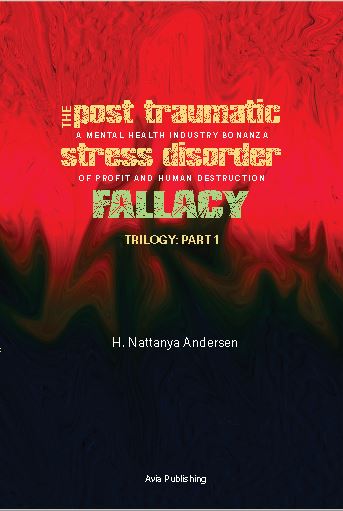 “With the exception of two mental health practitioners out of 24, I was only directly or indirectly made to doubt my own sanity. This feeling was enhanced by my Ativan consumption, I am sure. I was steadfastly encouraged to believe in my own mental defectiveness, my own warpedness from the cradle and long before the PTSD-causing event.”

She notes repeatedly that the bulk of PTSD cases are the very people who are tend to have strong mental health to do their jobs, including pilots, first responders and the military. Yet the “mental health cabal” frames the rampant comorbidity of PTSD and other mental conditions as having been there long before PTSD appeared, even from birth.

Nattanya frames it differently. She blames the many conditions PTSD sufferers face on the many pharmaceuticals they are forced – yes, forced at pain of losing their income – to consume.

Through meticulous research, Nattanya was determined to learn why so many doctors had treated her for so long in so many different ways, only to find herself sinking deeper and deeper into the abyss…until one day, she shook them all off.

And began to recover.

She details her journey from drugged-out patient to taking charge of Self, adopting mindfulness, spirituality and inner self-exploration to recover. She says that no doctor can “cure” a PTSD patient, because PTSD is not a disease, but rather an existential crisis. It is brought on by circumstances beyond what a human could expect to be considered normal. Therefore, one’s reaction can not be expected to be normal. Nattanya frames this as an opportunity to reinvent one’s Self.

“If we forfeit the opportunity to heal ourselves, we defeat our life’s purpose. That purpose is the PTSD-gifted opportunity to create out of ourselves and our imagination the human being we would love to be. To create the one exactly to our liking, the one filled with kindness, goodness and love for the Self, and in consequence, for love to all those whom we encounter.”

Along the way, she rips apart the non-science behind so much of the mental health industry, including the DSM-5. This is the American Psychiatric Association’s creation, the fifth edition of the Diagnostic Statistical Manual Of Mental Disorders. It is the mental health industry’s diagnostic bible. She notes that this manual reclassifies many behaviors previously viewed as natural human characteristics, behavior patterns and reactions to regular life, framing them as disorders to be treated. With slight exaggeration for effect, she notes that:

“Mental health practitioners nowadays diagnose clients with PTSD because of hangnails or childbirth. That gets as many humans as possible on mind-altering pharmaceutical drugs, leading to addiction within hours, to invoke the Matrix zombie society.”

And she asks a very piercing question of us all:

Why is the mental health industrial complex allowed to destroy humanity at large with their medical and mental health concoctions and treatment theories? Why is this seemingly purposeful destruction not only accepted but encouraged without protest by the medical profession at large?

Here’s her story on the back cover blurb: 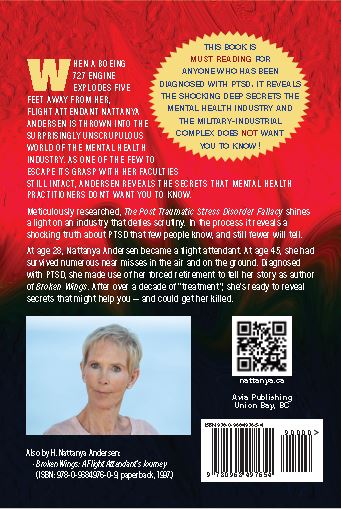 When a Boeing 727 engine explodes five feet away from her, flight attendant Nattanya Andersen is thrown into the surprisingly unscrupulous world of the mental health industry. As one of the few to escape its grasp with her faculties still intact, Andersen reveals the secrets that mental health practitioners don’t want you to know.

Meticulously researched, The Post Traumatic Stress Disorder Fallacy shines a light on an industry that defies scrutiny. In the process it reveals a shocking truth about PTSD that few people know, and still fewer will tell. At age 28, Nattanya Andersen became a flight attendant. At age 45, she had survived numerous near misses in the air and on the ground. Diagnosed with PTSD, she made use of her forced retirement to tell her story as author of Broken Wings. After over a decade of “treatment”, she’s ready to reveal secrets that might help you — and could get her killed.

And, yes, there is a Part 2 on it’s way, in part due to the amount of research Nattanya has unearthed.

You can pick up your copy of The Post Traumatic Stress Disorder Fallacy (Part 1) at Amazon.com.