Is cursive writing for dinosaurs?

Cursive writing has been banned in Finland.  OK, that sounds like hyperbole, but let’s just say that the days of cursive writing are starting to look numbered.

I was asked to take a writing test the other day. I pulled out my laptop, but I was stopped. “No technology,” I was told. A few minutes later, the pain in my hand reminded me why I love keyboards, even though I am a two-finger typist. Writing has been replaced by typing for most of us. My hand cramps if I try to write for more than a minute with a pen, because the handwriting muscles have atrophied!

Remember the 3Rs?  Reading, writing and ‘rithmatic?  As grammatically incorrect as they were, they were nevertheless the sacred foundation of education programs everywhere. 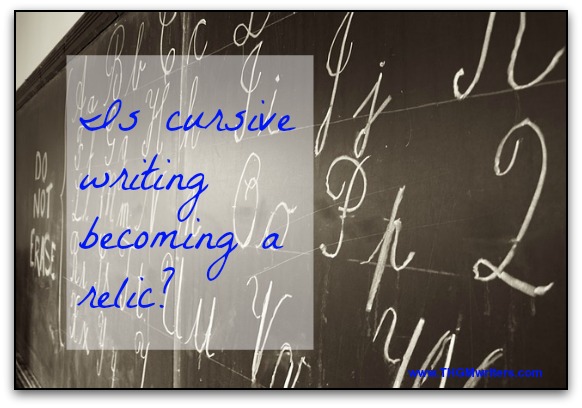 Well, no more.  Finland is making luddites of the rest of us by removing cursive writing from its curriculum, and replacing it with typing.  It seems that handwriting is an anachronism in a time when people text and email, type and punch buttons.

Is it a good thing that we stop writing by hand?

Here are four reasons why handwriting should be preserved:

First, it is the last vestige of our own humanity.  A hand-written note will always be written by a human being.  A typed note can be created by code and an algorithm.  In fact, most major websites today create messages on the fly, and there is no reason to believe that this will not become more and more common with the Internet of things.

Second, something hand-written is personal, as you can read in this post on dating advice and writing love letters.  And there are times, like when courting your heart throb, that personal is best.

There are times when personal is best, and that means writing by hand.

Third, paper notes, whether handwritten or printed, preserve the future.  There is no reason to believe that archeologists from 200 years in the future will be able to read the data on a smart phone or a tablet.  We have all seen Star Trek, and they have no USB ports.  But as long as humans of the future have functioning eyeballs, they can read anything we write on paper, canvas or cave walls.

Speaking of Star Trek, we’ve all seen that nobody will type or text or push buttons in the future.  We will all be speaking into our computers.  So fourth, why even pretend there’s a reason to learn 2015 button-pushing and key-pushing technology (or spelling, for that matter) when in a matter of mere centuries it, too, will become a quaint anachronism?

Should the students in Finland (and elsewhere) stop learning cursive writing?  Sure, if we plan to ban ballet, classical music, Shakespeare and romance. Is cursive writing a lost art? Perhaps more to the point, is it just that – art – and nothing more?

Someday cursive writing might be pointless, but has that day come yet?  We still need writing and we still need paper.  But perhaps paper writing skills will be relegated to an select group of professional calligraphers.  After all, we need nuclear science and nanotechnology, but they never taught me that in school.

What are your thoughts on this? Is the time right to move on and turn cursive writing from a basic function into an art form?