How to describe a character (with free character development crib sheet)

It’s been said that every story has been told over and over. But characters are unique and refreshing…if you write them right. Here’s how to develop a character.

Every story is built on two fundamental bases. The foundation is the plot. The plot is fairly simple. It can be told in a few sentences.

You might spend a further few pages describing the many twists and turns in the plot.

On that foundation grow the characters.

This is where it gets exciting. People follow the plot, but they relate to their fellow humans (or non-humans given humanesque personalities).

In fact, the characters are the vehicles we ride to get through the plot.

We see the plot through their eyes.

We feel the plot through their emotions.

We see threats and opportunities, heroes and villains, love and hate through their thoughts and their emotions.

Before you begin writing a novel (or any other “story”) you will have to define and describe each of your main characters, as well as many supporting characters. The strength of your story rests on the strength of your characters almost as much as on the plot itself. The story is only as compelling at the characters you create, as it is through their eyes that people will follow the plot.

The problem is that often people find it hard to find the right adjectives, the right nouns, the right words to describe people. Real people or fictional characters, developing them is not easy.

One of the reasons people come to us to help them write their stories is that they don’t know where to start. But even when they hire us, they need to be able to articulate what they see in their mind’s eye. They need to be able to describe the characters to their ghostwriter well enough that she can find the right words.

So, we wondered, how can we help?

The shortcut to describing a character

We have designed a handy “crib sheet” that you can use to help better organize your thoughts. It’s not a “cheat sheet”, because this is not cheating. It’s like a mini workbook that will guide everything you write.

It will be useful for anyone who…

Here is what the character development crib sheet looks like: 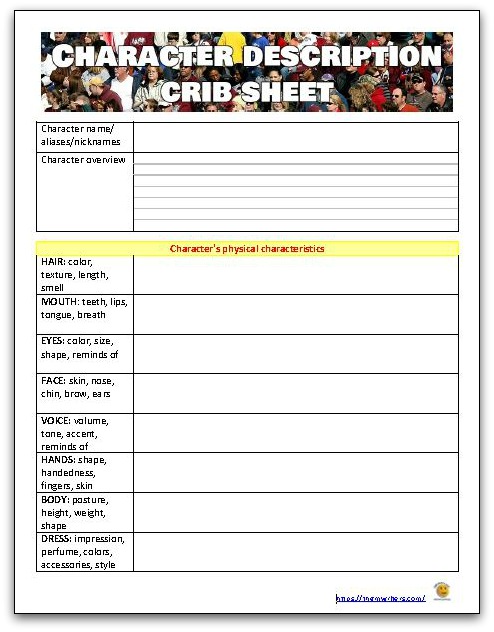 PRO TIP: When describing any aspect of a character, whether it’s her hair or his best friend, think about what it means. Think about how you can convey personality through that description. You might find that you change the color of a character’s hair or the career path he took, just to give readers a better, possibly subconscious, idea of who this character is.

And remember, you are listing the character’s attributes on the crib sheet. In the manuscript, you’ll want to infer many of those attributes by what the character does, by what other characters observe about her and by other storytelling techniques, rather than just saying what that characteristic is.

I got a free #character development crib sheet for my book. Get yours, too! #AmWriting