Character development is complex. But in children’s books, and even books for teens, the approach is a little different. Here’s how to develop characters for kids and teens.

It seems like just yesterday (but it was actually a few months ago) that I announced the Character Development Crib Sheet. That crib sheet was, of course, intended for an adult audience with adult characters.

Children and teen characters are different.

They have less history and less control over their lives.

Rather than families to feed, they have homework to complete and a myriad of adults watching over their comings and goings (although less so for teens than for children and pre-teens).

While most of the rules of character development and character description hold equally for children and adults, there are some differences.

No problem – we have now developed the (equally free) Character Description Crib Sheet for Children’s Books. It will be useful for anyone who… 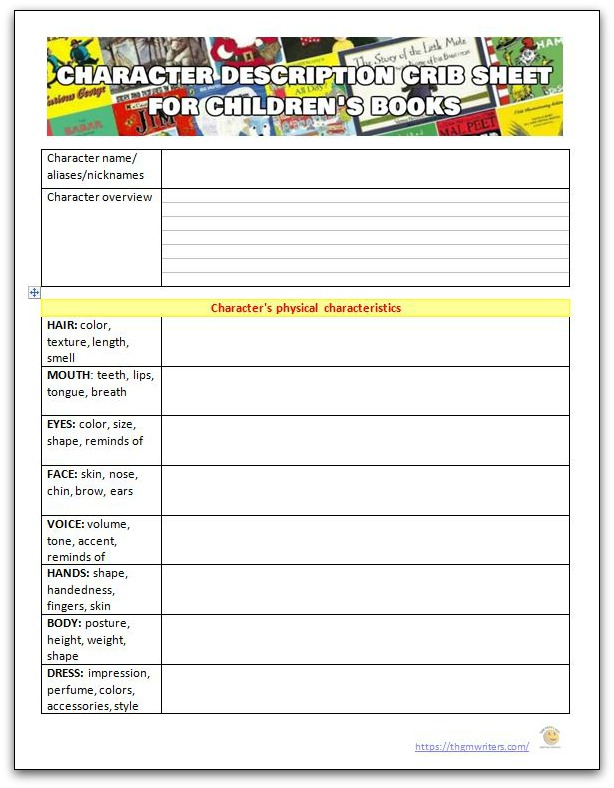 The adult and children’s crib sheets are really quite similar in most ways, but there are some important distinctions, and this special shortcut just for children’s writers should help you more easily prepare your manuscript.

One example of a distinction is that a child’s life often revolves around school, so everything the reader sees through the main characters’ eyes is colored by the school experience: things that happen in the schoolyard and the classroom, homework schedule, teachers they like or that give them a hard time, etc.

PRO TIP: When describing any aspect of a character, whether it’s her complexion or what haunts his dreams, think about what it means.

And remember, you are listing the character’s attributes on the crib sheet. In the manuscript, you’ll want to infer many of those attributes by what the character does, by what other characters observe about her and by other storytelling techniques, rather than just saying what that characteristic is.

Think about how you can convey personality through each characteristic. For instance, think of the personality conjured up by the names “Snape” and “Slithering”, or what Snape’s greasy hair implies about his personality.

On the other hand, keep in mind the age you are targeting. The younger the audience, the less you can infer. For very young children, you’ll have to be more direct.

I got a free #character development crib sheet for my #kidlit book. Get yours, too! #AmWriting