Dr. Seuss books – to cancel or not to cancel?

It is right to rethink old literature. But does cancel culture amount to book burnings?

It was on Twitter that I first saw news that people were cancelling Dr. Seuss. Sooner or later, everybody gets cancelled, but I could not imagine why anybody would pick on Dr. Seuss, a childhood favorite of mine.

It turns out that all the discussion is because Dr. Seuss Enterprises, the organization in charge of Dr. Seuss’s legacy, announced that it would no longer publish six of his books, saying that “These books portray people in ways that are hurtful and wrong.”

It was a proactive action. But it got media play and people have weighed in both against and for Dr. Seuss.

An interesting by-product of the announcement is that several Dr. Seuss titles shot straight to the top of the best seller list. As I write this, I see 21 Dr. Seuss titles in Amazon’s top 50. Given that none of the six titles being retired are among those, this is not a case of “limited time only” appeal.

Much of the discussion has been framed around a 2019 study of 50 Dr. Seuss books, as well as a look at some of his political cartoons.

His Wikipedia page paints a more objective picture, including some pretty nasty political positions, but also some altruistic intents. Good and evil in one person? Whoodathunk?

Consider an author’s bias when evaluating what they say

Before placing too much trust in a study, it is always worth knowing something about the authors and their bias. Katie Ishizuka and Ramón Stephens refer to themselves as “critical race scholar-activists”. They run The Conscious Kid, an organization “promoting healthy racial identity development in youth”.

This is a worthy cause, and I assume it’s a great organization. However, a study by activists must be scrutinized very carefully, because the authors have a strong bias and most likely an agenda to push.

Before listening to another word, you should know my bias. 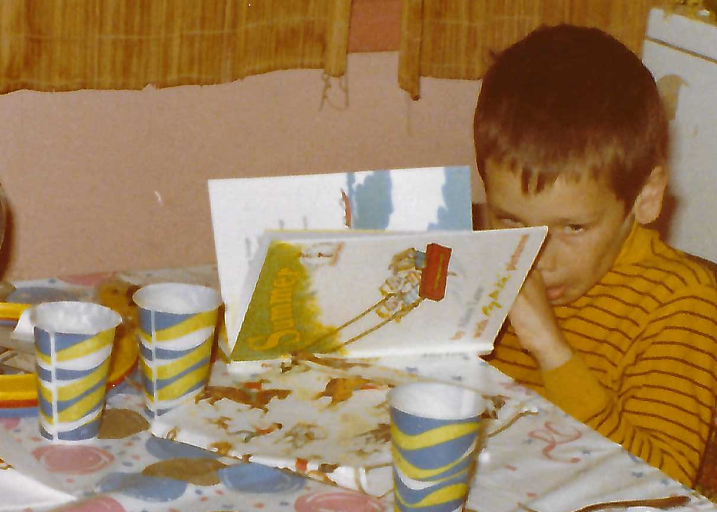 Yes, that’s me as a kid, reading Dr. Seuss. Well, it’s not really Dr. Seuss. Yes, the Cat in the Hat logo is on it. And the cover is designed to look Seussian. But the author is actually Alice Low.

It seems that several Dr. Seuss books I loved as a kid were not even written by him, such as Go Dog Go, A Fish Out of Water and the one above, Summer.

But I did love a lot of genuine Dr. Seuss books as a child, too, such as Hop on Pop, And to Think I Saw it on Mulberry Street and One Fish, Two Fish, Red Fish, Blue Fish.

That is this writer’s bias, fully transparent. So if I seem too kind to Dr. Seuss, it might simply be nostalgia speaking.

There is no question that many of his political cartoons are offensive by today’s standards. I would wager that many people found them offensive back then (1920s and onward). Of course, one can expect that. Political cartoons poke fun at individuals, movements, ideas and events. They make use of mockery and stereotypes to get their points across.

Still, a number of his cartoons are offensive by pretty much any measure. My personal feeling is that he goes beyond political cartooning to instigate racism in a number of cases.

However, the study raises many questionable inclusions and exclusions. Indeed, the authors sound in a number of places like conspiracy theorists searching for hidden meanings. As a child, I was totally unaware of any of them, and they would not have affected how I view race.

For example, the authors of the study write:

“In the sequel The Cat in the Hat Comes Back, the story is centered around the black Cat expelling ink from his body and getting it all over a White family’s home. This reflects an anti-Black reference from the early twentieth century that Black people get their skin color from drinking ink. For example, a 1916 magazine advertisement by Morris and Bendien shows a Black baby drinking ink, with the caption: “N*gger milk” (Pilgrim). The connotations are that Black people are not human, their Blackness is unnatural, and Blackness is dirty.”

Frankly, I did not see the cat as a representation of anything. I was a kid. I would never have drawn that connection now, even as a somewhat sensitized adult, if this study had not pointed it out.

And were there really people so stupid, even back then, as to think that drinking ink created darker skin tones? That’s a pretty far-fetched conspiracy theory, isn’t it?

Oh, wait…in 2016, half of Trump voters thought Democrats were running a child sex ring out of the basement of a pizzeria that had no basement. So maybe some fools believed that ink theory, too.

These are all good questions. Dr. Seuss Enterprises decided that six of the books are offensive enough to today’s societal norms that they should be cancelled.

But you might disagree. You might think that all or none or some other combination should be cancelled.

I won’t tell you what to think, but I will give you a few lenses to look through, and then I will tell you what “conclusion” I have come to. I put that word in quotation marks because I might yet change my mind as my thinking evolves.

Whenever we look at a work of art, it needs to be viewed through the lens of the time (and the perspective of the prevailing audience at the time). In this case, that time actually spans a great many years, but many of his best selling works are from the late 1950s to early 1960s. Here are his top ten sellers:

Best selling does not mean most iconic, or The Lorax would be on this list. And Horton Hears a Who and How the Grinch Stole Christmas would surely figure in the top five.

Looking through the lens of time, however, should not be an “excuse”. It is one thing to reflect prevailing attitudes. It is quite another thing to be an instigator.

For instance, I am sure there were many people who felt it important to be kind to all people, regardless of ethnicity. But they might still have equated darker skin tones and foreign accents with lower intelligence, simply because they did not know any better.

My sense is that Dr. Seuss reflected the times in most cases, certainly in his children’s books. I don’t see overt racism in the ones I grew up with, as I do in his political cartoons. Perhaps you see it differently. I do see a few cringe-worthy racial stereotypes, which might have been just playing to prevailing attitudes of the time or might have been purposefully racist. I can’t judge that, as I did not live through that period.

Of course, another important lens to look through is that of marginalized people who are misrepresented or underrepresented.

On these counts, I will refer first to the historical context.

“Underrepresented” was natural, just because people (White writers) were not thinking of representation in those days.

But I don’t recall seeing almost any obvious characters of African lineage and I recall just one of Asian lineage. A sign of the times, yes, but I wonder how non-Whites felt about that lack of representation back in the day. Maybe it hurt. Maybe they were too used to it to hurt. There is no way realistically for me to determine this, certainly not from a racial perspective, as I am White.

More importantly, how do non-Whites feel about it today? A historical lens is great for evaluating a work of art academically, but it’s not a very practical tool. When deciding whether to give these books to young children in the 2020s, we need a more contemporary approach.

Sadly, the lack of diversity is glaring. Except… 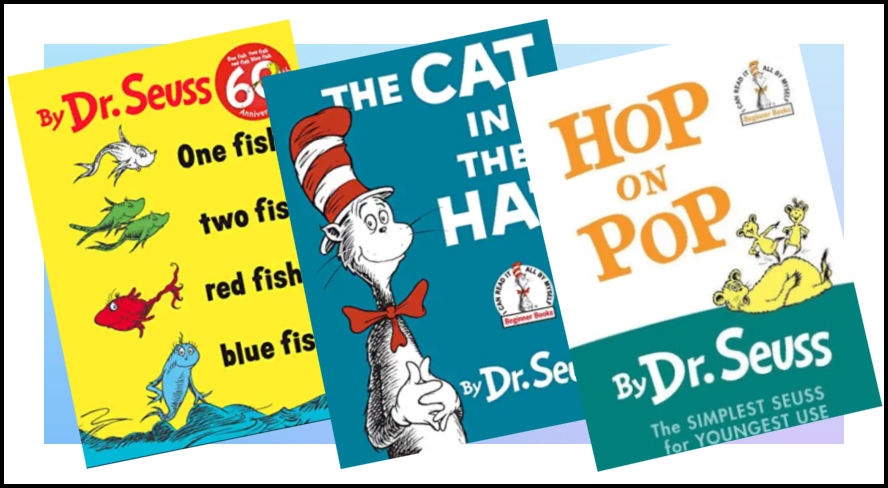 Look at the covers of all these books, and what do you see? The main characters are not even human. So would this teach racism? Or would it teach diversity? Would it teach children to love animals? All of the above? None of the above? I don’t know. Would young minds factor out the animals and only register the little white children in the books?

Which brings us to the most important lens of all: the kids. Yes, the history lens is interesting, and we cannot ignore the lens of the people who might be hurt. But what do the actual readers see, and what do they learn?

I don’t know the answer, and again I must repeat that I am not the best person to judge this, but I suspect that both are true.

As a kid, I was oblivious to any hidden allegories or racist messages. When I mentioned the theory I quoted above about the Cat in the Hat to a teenager I know, her response was: “It’s a black cat?”

All of which makes me wonder if the researchers have found hidden meanings that were not even placed there, just because Dr, Seuss held some unsavory racial views.

Full disclosure: I did not play my Led Zeppelin albums backwards as a kid in order to listen for supposed satanic messages, nor did I assume that Ronald Wilson Reagan was Satan because the number of letters in his name were 6 6 6.

Of course, maybe those satanic messages were there. Maybe I just missed them.

And maybe Dr. Seuss actually did put hidden racist messages in his books. In which case I, and I assume millions of other children, simply didn’t see them.

That I was oblivious to any hidden allegories or racist messages does not mean that kids today would be just as oblivious, especially children with darker skin themselves. Obviously, age factors in, but this is also an area that is not for me to judge.

To cancel or not to cancel Dr. Seuss?

As I said at the start, you should make up your own mind what to think and what action to take. After all, this is complicated. For my part, this is how I feel:

Dr. Seuss can be part of a child’s library. But so can books like Simone B and the Magical Mirror and later on Magical Mountain. A good mix of books with a variety of human and other races is much more important than making sure every book balances out.

On the other hand, there is no reason Dr, Seuss books have to be part of a child’s library. There are plenty of other great books to chose from. It certainly wouldn’t hurt to give today’s writers more space on the bookshelves.

To cancel or not to cancel?

I remember when Harry Potter was first published, many evangelical Christian organizations wanted the books banned from schools. Indeed, as recently as 2019, one school banned them.

Book burnings have always disturbed me. I think we are far more effective by simply selecting books we believe to be wholesome, and create the right balance to teach the values we want children to live by.

So should we cancel Dr. Seuss. I don’t think so, but maybe that’s just the nostalgia talking. Rather, I think we should supplement Dr. Seuss with books where protagonists represent the full richness and diversity of our society, not just racially, but in every other way, as well. I think there’s plenty of space for both the Grinch and Simone B.

If you have thoughts, please share in the comments below. Please keep them respectful, of course.