The 2022 MUSE Scholarship winner is a future sports journalist who warns us about the allure of fake news. Congratulations Caleb Thomas!

Somebody had to win it. Applications for the THGM MUSE Scholarship closed on May 15. And now, we have a winner to announce.

Caleb Thomas of Port St. Lucie, Florida, is the 2022 MUSE Scholarship winner. For the past year, he has been finishing up his high school in Edinburgh, Scotland. Now, he’s coming home to study multimedia journalism at Troy University.

Caleb plans to pursue a career in sports journalism. This field is not new to him, as has worked in the past for SportsTalkATL in Atlanta.

Choosing a winner was not easy, with different styles of writing and stories that took us from the streets of Paris to the subway of Toronto.

Caleb won the scholarship with a story called simply “Truth”.

Truth. Journalism. Has there ever been a time went those two words need more to align with each other than today? In recent years, the term “fake news” has ensnared the public discourse. People are finding it harder and harder to distinguish between real news and fake news.

We were drawn to Caleb’s story because it hit hard at the concept of fake news. That made his short story both timely and fundamental to what writers – especially journalists – will grapple with over the years to come.

Here is what he has to say about his story:

“My piece was inspired by my new part-time job/internship writing for a sports blog. Grabbing clicks and attention through headlines suddenly became a lot more prevalent to me, and it lead to a lot of deep thinking. Was I willing to sacrifice my integrity for a headline that pops? Judging by the nature of my submission, I’m sure you can tell — I’d rather treat everyone with respect and be humble than make a clickbait article.” 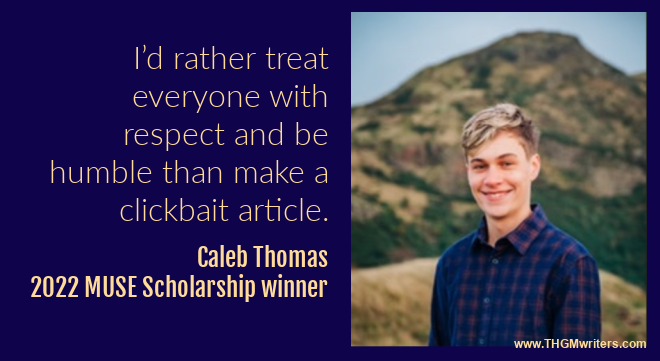 This is Caleb Thomas’ winning story: “Truth”. It is based in part on his field of journalism and in part on his faith in God. But mostly, it is a good story, well-written, with a powerful message that can benefit people in almost any field.

“Lying lips are an abomination to the Lord, but those who act faithfully are His delight.” Proverbs 12:22

“Simple enough”, thought Josh as he read the words from his Bible. But yet, it wasn’t that simple. The plain, blunt words left no room for interpretation, but there was still that shred of doubt nagging at his mind. Josh could feel anxiety seeping into his gut. It wasn’t supposed to be this way.

Journalism was supposed to be an easy occupation, a breeze. After all, anyone can write. What Josh failed to realize before choosing a journalism program is that capturing the public attention is not such a piece of cake. As the disgruntled student sat at his dark oak desk, he pondered what he had just done.

Earlier that day, Josh had confidently walked into the brightly-lit newsroom clutching the next breaking story. There was a thief on campus. At least that’s what everyone would think. Losing his laptop was one of the worst things that had happened to Josh since starting college, but he had a bright idea. Maybe, just maybe, if he wrote a story victimizing himself, people would believe the small fib.

Finding stories is more difficult to do than Josh thought. You have to scour the entire campus searching for events, major and minor, that may make a decent story. All of that just to have a few people skim the article and nonchalantly toss the newspaper into the nearest garbage can. Josh needed a high-profile, high-stakes, high-interest story that would grip the entire town.

It’s easy to see where this is going. With the newspaper deadline quickly approaching, Josh still didn’t have an article – unless you count the dining hall replacing their grimy, ancient coffee maker. A headline popped into his mind: “Watch out: a campus criminal stole my laptop.” The article’s content came soon after, and before he knew it, Josh was entering the newsroom. “Nobody would be impacted by the lie anyways,” Josh surmised.

It all came crashing down when the police patrols started roaming campus, and those close to Josh admitted how terrified they were. He may or may not have fabricated a bit about being robbed at gunpoint. There was no place to go, for confessing would surely end his journalism career. However, Josh couldn’t hold it in anymore. There was a monster of guilt clawing at him, and it was enlarged when his girlfriend wouldn’t even leave her dorm out of fear.

Josh decided to close the book on his journalism career, so to speak. After his deceitful escapade, he confessed to his lies and was promptly expelled. Sitting in his room, at rock bottom, Josh decided to dust off his tattered Bible. It was the only place he could think of to turn to, so he opened it to a random page. His finger rested on Proverbs 12:22, and the weight hit him like a ton of bricks.

Out of all the aspects of reporting, Josh underestimated the most important one – honesty. Reaching the point where he could forgive himself may take years, but Josh decided that journey would start now. Maybe he could become a fiction writer.