The Genesis One Code is Published

Another client of THGM Writing Services publishes his book. The Genesis One Code by Daniel Friedman reconciles biblical and scientific accounts of creation.

Here is how the book is described: 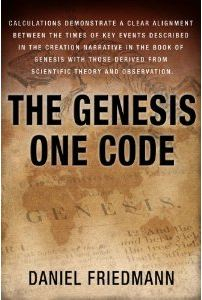 “Were the heavens and the earth created 6,000 years ago, as the Bible suggests? Or did the universe expand into existence nearly 14 billion years ago from a spontaneous “Big Bang”? Both dates cannot be right – or can they?

“Imagine that there were some medieval manuscripts, written eight hundred years ago, that could help us decipher Genesis to pinpoint exactly when the universe began, as identified by our most up-to-date cosmological theories. Further, suppose that these same manuscripts could help us extract from Genesis the timelines for the development of life on Earth, precisely as identified by the latest scientific evidence from the fossil record.

“The Genesis One Code offers a careful examination of the relationship between scientific theory and biblical teaching. The book targets the origins debate from a fresh perspective informed by scientific and spiritual research. The book demonstrates an alignment between the dates of key events described in Genesis 1 and 2 with those derived from scientific theory and observation. This alignment provides a compelling perspective deserving of thoughtful consideration.”

We are thrilled that Friedman came to us to ghostwrite his book.

You can pick up your copy of The Genesis One Code at Amazon.com.

Filed Under: Books and publishing Tagged With: client