If you really like Harry Potter, you might think twice about reading this ‘original’ screenplay from my archives.

I can’t really tell you how it started. One of my daughters has always been a huge Harry Potter fan. One day, she stumbled upon Potter Puppet Pals, a series of puppet shows on Youtube. At the end of this post are a couple examples, in case you are interested.

I would always tell a story to my kids at night when they were younger; even when I was too tired, they wouldn’t let me off for a night. I always made the stories up on the spot.

At some point, they asked me to tell a Potter Puppet Pals story. It is often a mistake to do something just because your kids ask. Before long, the nightly Potter Puppet Pal stories evolved a bit in my telling. For instance:

Since we write screenplays for so many clients, I thought I would share with you one of these stories – shorter than most, but nevertheless one of the better ones. I am not normally a screenplay writer (we have very good “real” screenplay writers on our team), but here is how it goes:

(Harry and Ron greet each other)

HARRY: What are you up to Ron?

RON: Not much, Harry? How about you?

HARRY: Nothing. Hey, here comes Hagrid. And this time he’s on foot!

RON: Wow! He’s not even falling out of the sky.

HARRY: Hey Hagrid, what are you doing walking into the scene? Is that even in the script?

HAGRID: Got myself a new job, I did.

HARRY: What, you got fired?

HAGRID: No, nothin’ like that. Just makin’ some extra cash on the side as a door-to-door Kleenex salesman.

HARRY AND RON: A what?

RON: But where’s the money in trucking around huge boxes of Kleenex that sells for…what, a dollar?

HAGRID: Just one box. This one is enough. 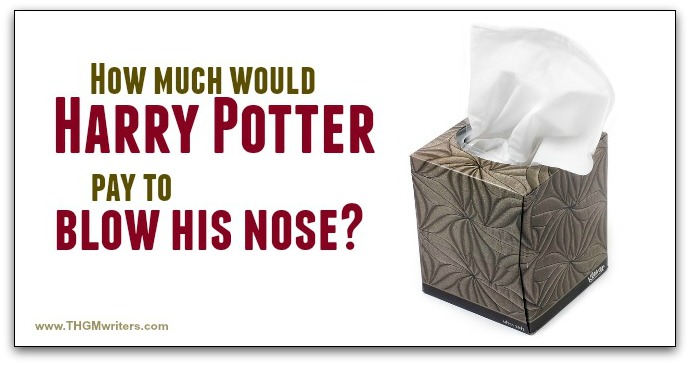 HAGRID: Need a Kleenex? Twelve dollars for one.

HARRY: Twelve dollars for a box?

HAGRID: Twelve dollars for a tissue.

HARRY: But Hagrid, who’s going to pay twelve dollars for a tissue?

HAGRID: Well, I…uh…I can’t be givin’ away trade secrets, now, can I? But I have…uh…found a market.

SNAPE: I see we have here that obnoxious Potter kid and his Weasley sidekick.

HARRY: We love you, too, Snapy Baby.

HARRY: So much so that I kissed you in your sleep. And may I say that those lipstick marks on your cheek are very becoming.

SNAPE: That’s it. I’ve had enough of your driveling insolence. Fortunately, I have just concocted a wonderful potion of my own design that will teach you a lesson.

(Snape sprinkles some potion on Harry and Ron.)

HARRY: Mine is getting all puffy…

HAGRID: Kleenex? One for twelve dollars.

I hope you like it as much as my daughters (and their cats) did.

Postscript. I rarely followed up one day’s story with a sequel, but the next day the “Kleenex salesman” returned selling anti-dragon-bite pills. Don’t ask.

This one was probably our all-time favorite, just because it was so catchy.

Or maybe it was the Mustache Buddies episode we liked most.