A sneak peak at the leaked CIA Style Guide

This is not satire; this guide really exists and the quotes in this post really come from the CIA’s Style Manual and Writer’s Guide.

People love a good secret. In fact, few things can be spread to all corners of the globe faster than something that nobody is supposed to know. So it is little wonder that when the CIA’s Style Manual and Writer’s Guide was leaked, we got our hands on a copy without even having to double-cross anybody, steal it or escape over a wall with machine guns blaring at our backs (lucky for us).

The purpose of the style guide, apparently, is to avoid being an agency that talks about dead bystanders as “collatoral damage” and torture as “enhanced interrogation techniques”.  Here is what the introduction tells us:

“Good intelligence depends on clear, concise writing. The information CIA gathers and the analysis it produces mean little if we cannot convey them effectively.”

Oops.  It seems I might have run afoul of the style guide already.  I referred to “the” CIA above, whereas they seem to need no “the” when they speak of themselves. 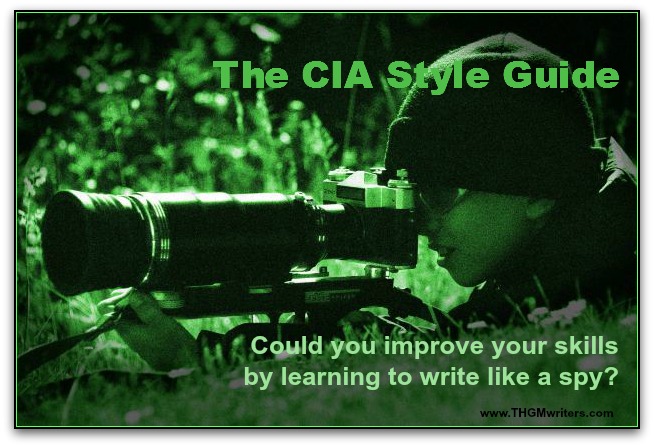 Most of the content of the manual is actually pretty boring, much like a spy’s life.  It can’t all be sports cars, tuxes and casinos.  Being a spy probably means laying hidden for days, spying through a glass at a distance, waiting for something that never happens.

So the manual spends talks a lot about when to capitalize a title and how to write out numbers and how to properly punctuate a report.  Interestingly, the CIA uses a 24 hour clock.  So while the United States officially rejects the metric system, the CIA will nevertheless write “1300 hours” rather than 1:00 o’clock. In Section 2.21, it even states:

“The Intelligence Community generally uses the International System of Units (metric system) to express size, specifications, or characteristics of things.”

Don’t you just love the imagery? “The Intelligence Community.”  I can just picture the CIA operatives, drinks in hand, swapping secrets (and embellishing their successes just a little) with their KGB counterparts, laughing about the good ol’ days and just generally talking shop.

“Remember when we snuck that 30 megaton bomb right from under your noses off the coast of Chile?”

“Ho, yeah! And when your butter fingers slipped, they all thought it was an earthquake!”

It all sounds just so sweet and cuddly and friendly, this Intelligence Community.

Conveniently, the CIA Style Manual (did I give it an appropriately abbreviated title?) includes a metric conversion table, freeing its operatives from having to search Google to find out that one cubic inch is equal to 0.00001639 cubic meters.

Section 3.3 will come in handy for those of you wanting to incorporate true spy talk into your books and blogs, but fear that you will lose readers with lengthy terms.  This section lists well-known acronyms that do not need to be spelled out.  Instead of losing your readers with long terms like “Organization for Economic Cooperation and Development” and “intermediate-range ballistic missile”, you can lose them with acronyms like OECD and IRBM.

For a guide seeking to spread clarity, I must confess that I am totally unclear on how I should refer to the UK…or to the United Kingdom…or is it Britain? Maybe after reading this, you can help me out?

“Our style with respect to references to the United Kingdom of Great Britain and Northern Ireland is flexible to the same degree that it is for the United States. Britain or Great Britain is often used as the shortened form of the country name,  but the United Kingdom (note the lowercase t in the) is preferred. UK is acceptable as an adjective or, preceded by the definite article, as a noun, except in cases where “sparing use” obliges us to avoid it. British is also an acceptable adjective-according to some authorities, it is the preferred one. “

If you were wondering where the CIA stands on the indefinite article before an acronym beginning with a consonant that sounds like it starts with a vowel (whether to write “a FDA recall” or “an FDA recall”), they stand firmly for the sound: an FDA recall.  It’s right there on page 56.

My favorite part of the manual is the redundancies section.  Yes, the manual includes a list of redundancies to avoid.  Presumably, that leaves us with quite a lot of room to playfully slip into our intelligence reports redundancies that they missed.  Here are a just a few examples the Manual says have been observed over the years by the “redundancy police” (Do they really have such a department?!?) from page 169:

Fortunately, it does not tell us to avoid “expected surprise” or “dubious logic”, so we can still have some fun when reporting on the dubious logic of the expected surprises that North Korea has in store for the rest of the world.  But earlier in the Manual, we are warned that “both” is redundant when used in “they both agree”.  So there.  You’ve been told.

Along similar lines, we read on page 150 that we have to be careful when we report on casualties.

“In formulating casualty statistics, be sure to write “killed or wounded,” not “killed and wounded.”

Given the wide distribution of this helpful manual, it is not surprising to find that The Guardian is also a big fan.  They appear pleased that there are wise warnings about the dangers of a dangling participle, and they offer this example (not from the manual):

“After being waterboarded, Agent B found that the subject became more loquacious.”

Funny thing…I didn’t see any quote so colorful in there when I was snoozing through it.  If you find anything interesting that I missed, feel free to report on it in the comments below.  The full text can be found here.