17 lies the English language tells you

English, like any language, is straightforward. Words mean what they mean. And if you believe that, you’ve been lied to.

“When I use a word, it means just what I choose it to mean—neither more nor less.”

So said Humpty Dumpty in Through the Looking-glass.

FACT: hundreds of English words don’t actually mean what we mean by them.

These are the little white lies that the English language tells us. We all use the words incorrectly, because if we all agree (nudge, nudge, wink, wink, say no more, say no more), then words actually take on the meaning that they don’t mean.

Here are just a few examples I’ve plucked out of an ocean of misused meanings.

Not all words actually mean what they mean.

Let’s start by looking around us. That phone in your hand is not a phone. In fact, “telephone” is not even one of the top ten uses for that “phone” in your hand. Notice how I said telephone. “Phone” isn’t even the real word for that thing you are holding, which is actually a combination of:

As Alex from 1996 asks his 2017 friends in Jumanji: Welcome to the Jungle, does “phone” have a different meaning in the future?

It does. Your phone is not actually a phone. It is technically a mobile computer. Will it also soon be a masseur and a screwdriver and maybe even a teleportation device? Stay tuned. 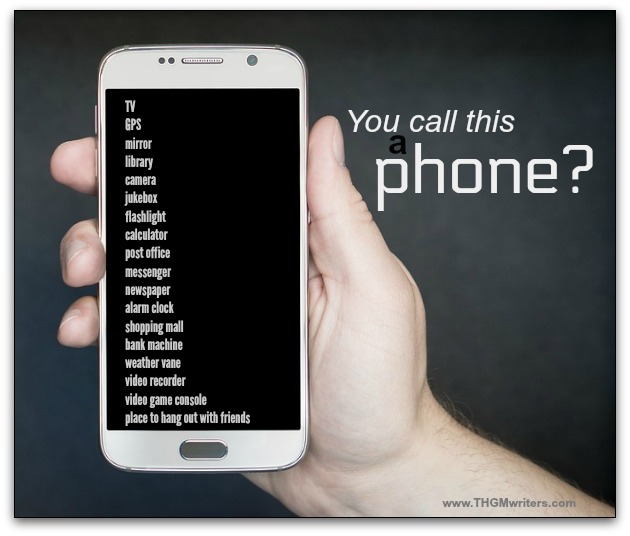 Speaking of “computers”, it appears that the English language thinks I use my desktop and laptop, not to mention my tablet, for computing. Ha!

The fact is that I rarely use the calculator function on any of these. I recall the first computers. They took up an entire room and punched out data on yellow or blue cards. Back then, a computer computed. That’s before Apple and Microsoft realized that the increasingly compact machines could do more useful things, such as sharing lolcats and “liking” indie bands.

My desktop is a meeting place and a communications hub. It is my library and my newspaper. It is my post office and my typewriter. But it is not my computer.

When was the last time you dialed a number?

I remember when I was a kid. We had a black phone with a black handset connected to it by a black spiral wire. We put our finger in a hole and dialed a number. And it hurt. The metal edges of the holes became sharp if we had a lot of dialing to do.

Newer phones had plastic dials that hurt less. Then came touch-tone. Then came cell phones. Then came voice-activated “dialing”. Then came thought-control phones… Oops, I think I’m getting ahead of technology.

I haven’t dialed a number in decades!

I haven’t dialed a number in decades.

Let’s get one thing straight. That box you use to heat up your food is an oven, not a microwave. Specifically, it is a microwave oven, because it uses microwaves to heat your food. Ovens are things you put food into for heating. You can see ovens.

an electromagnetic wave of extremely high frequency, 1 GH 3 or more, and having wavelengths of from 1 mm to 30 cm.

When was the last time you went to see a film? If you are under 40, probably never. Film is old technology. We no longer record video on film. We record it digitally these days.

I no longer iron my clothes, mostly because I am lazy and starved for time. And my clothes don’t wrinkle that badly. Plus, there is no such thing as an iron in the 21st century. Now we aluminum our clothes. What we call an “iron” is made of aluminum or an alloy of aluminum and steel.

You don’t own a curling iron, either. You actually own a titanium. Or a chrome. Or a ceramic. Or a tourmaline. Or a Teflon. Curling irons are made of various materials, in fact, including almost every metal … except iron.

Remember those 2oth century incandescent light bulbs? I know, I still have some of them around the house, too. Those actually are bulbs.

CAVEAT: There is nothing to stop somebody from wrapping a bulb around a compact fluorescent spiral, thereby making it a “light bulb”.

Do you wear running shoes or sneakers? You might. But more than likely, you don’t.

I run from time to time, so I wear running shoes. I don’t do much sneaking, so I don’t wear sneakers.

I’ll leave it there.

Ships sail from one port to the other. Just kidding. The fact is that most ships haven’t sailed for a century. Once humans learned to harness the power of steam, we folded up our sails.

As for sailors, they went the way of the moat diggers. We have seamen and deckhands, but we do not have sailors on modern ships. 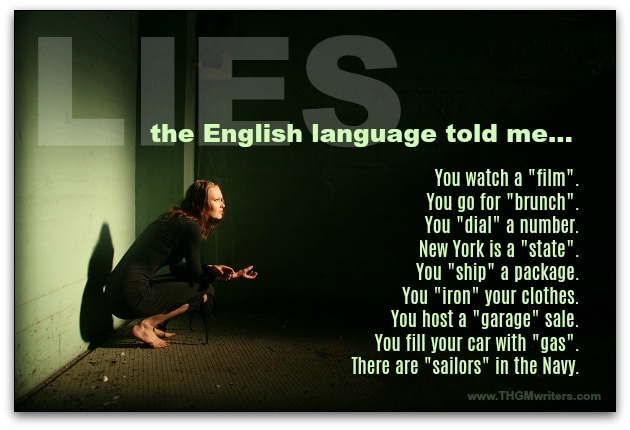 Speaking of ships, we don’t ship much these days. No, Amazon doesn’t ship. Land’s End doesn’t ship. Shipping means to move by ship. We still do ship some things, mostly very heavy items made overseas or bulk goods:

Anything produced in bulk in one part of the world gets shipped by ship, which are really, really, really incredibly large boats.

As for your shipping and receiving dock:

There might be times when you are in a state of confusion, perhaps a state of intoxication, but never in the state of New York.

A state is a sovereign country. Many of the framers of the US constitution felt that each of the 13 colonies was its own country. They were sovereign states. They were simply united in order to do certain things.

Is it time for #Wyoming to take its seat at the United Nations?

Over time, the federal government grew more powerful. The United States is a state, recognized as a country around the world. New York is not a state, nor is California or Wyoming. Could you imagine Wyoming showing up at the United Nations trying to take its seat?

No, Texas is not a state, either.

Have you ever felt depressed? Probably not. While I am sure some people reading this have, most have not. Here is the definition of depression:

Depression (major depressive disorder) is a common and serious medical illness that negatively affects how you feel, the way you think and how you act.

Have you ever felt Lethargic? I thought I had, until a doctor rapped my knuckles for throwing around a medical terms so carelessly. Here is the definition of lethargic:

a lowered level of consciousness marked by listlessness, drowsiness, and apathy.

When you’re running on empty, you fill your car up with gas, right?

Wrong, for two reasons. First, if you filled your car with gas, you’d drown your passengers. You fill your tank, not your car.

Second, if you really did fill your tank with gas, you couldn’t drown them. You can drown people only with liquid.

All substances can come in three forms:

When anything gets cold enough, it solidifies or freezes. It becomes solid. The point at which it becomes solid is the “freezing point”, which is different for each substance. For water, that’s 0º Celsius (32º Fahrenheit), and we call it “ice” when it freezes.

When anything gets hot enough, it evaporates. It becomes gas. For water, the boiling point is 100º Celsius (212º Fahrenheit), and we call it water vapor. (Yes, all liquids evaporate at almost any temperature, but this is not a physics class).

Handy tip: fill your gas tank with liquid, not gas.

Back to filling up your car…er..tank. Gasoline freezes at…well, it’s complicated. Since gasoline can be made in different ways, its freezing point could be anywhere from 38º to -204º Celsius (40 to 50 below Fahrenheit). Because of the different compositions, the boiling point is trickier. It is typically from 40 to -50º Celsius (100º to 400º Fahrenheit). If you really want to fill your tank with gas, you’ll have to go someplace where they serve it up hot.

However, I recommend filling your tank with liquid.

Some women and some men wear earpins.

That’s why many people call them yard sales now.

There’s just one problem with this. These are rarely “yard” sales, either. For the most part, they are driveway sales (not because the driveway is actually for sale, but because the venue is the driveway, not the yard and not the garage).

There is just something about the English language that seems designed to spread confusion. No wonder immigrants have such a tough time learning our language. English is a liar.

Filed Under: Translation and languages