Nine reasons to pay your writer

Some people just don’t like paying writers.  Here are nine good reasons to pay your writer, and to pay on time.

It’s as predictable as the spring, and much more frequent. Every couple weeks somebody asks me if one of our writers would be willing to work on spec, to arrange some sort of “partnership”, to accept payment as a percentage of royalties after their book gets published, or in some other way defer payment until a later date.

These are all euphemisms for asking us, THGM Writing Services, and the writer herself to assume the risk of your project.   If you are considering asking me to take on the risk of you pursuing your dream, you should read some of my reasons that this makes almost as much sense as investing in a moat-digging start-up: 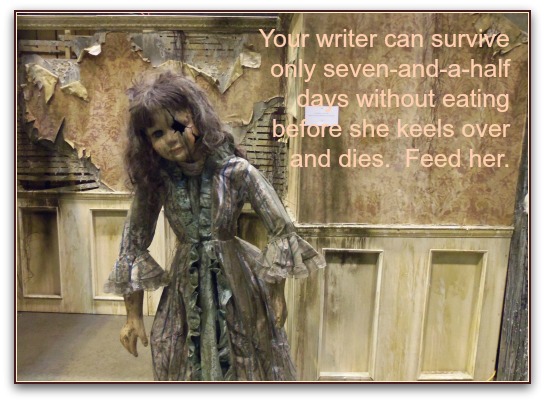 1. Your writer might starve to death.  She will work hard for you and apply her skills, which she has developed over years of experience. Skill, experience and especially hard work require fuel to keep them going.  Your writer can only survive seven-and-a-half days without eating before she keels over and dies.  And it will take more than seven-and-a-half days to complete your manuscript. Feed her.

2. The writer you hire is your supplier. Would you ask an electrician, gardener or furnace installer to accept payment when — and if — your house sells? Of course not.  Your electrician, gardener and furnace installer aren’t that stupid.  If you find a writer stupid enough to accept a pay-me-if-and-when-I-get-published proposal, the last thing you want to do is have her writing your book.

3.Whose idea is this book? Asking a writer to forgo payment in the hopes of making a bigger fee when you publish is essentially asking them to invest in your idea for a book. Remember, these are writers. They have dozens of their own ideas they would rather invest in.  The reason they are writing your story rather than one of their own is for the certainty and immediacy of payment. 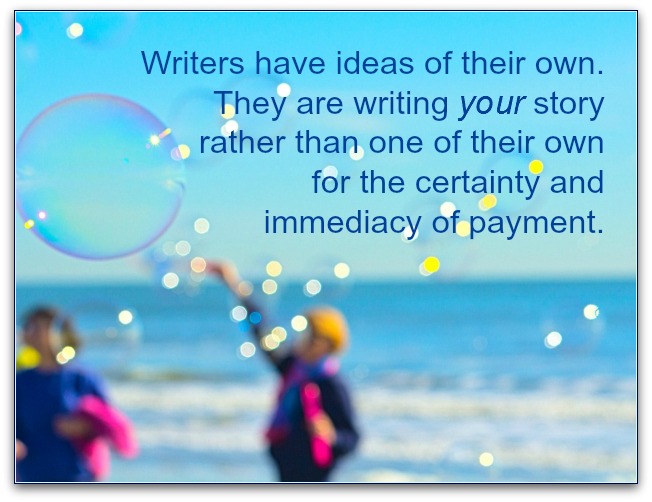 4. Your local banker is lonely. Rather than asking a writer to invest in your idea for a book, ask a bank.  That’s what banks are for.  If you can make a sound business case for your book, banks are always happy to share in other people’s profits, and that includes yours.  And they are so much better at lending money than writers are.  So, in short, pay your writer for her work.  Get the money from a real investor, like a bank.

5. It takes time for a book to get published. Unless you happen to be a former head of state or a Major League MVP, your writer could starve while waiting for you to publish.  Please see keel-over-and-die limitations outlined above.

6. We are writers, not gamblers. The reality is that most books will never see the light of day. And of those that do, not all will make a handsome profit. Sorry, but that is the truth.

Does the writing suck? Not with our writers!

Does the idea suck? Strangely enough, no.  Almost every idea that people present to us as the greatest idea since sliced havarti…is a pretty good idea for a book. It might not be the greatest idea ever, because the The Hitchhikers Guide to the Galaxy, the Dictionary and the Bible have already been written.

But it takes more than just a great idea and spectacular writing to make a book successful. It takes perseverance to keep knocking on doors, as the folks at Chicken Soup for the Soul discovered, wearing their knuckles bear, year after year, until finally they found a publisher willing to give their idea a go. Our writers might really believe in your idea, but they are not prepared to gamble a few months of pay on the chance that you or anyone else might turn out to be that rare gem able and willing to wear your knuckles bear.  Not even if you present a doctor’s note about the structural integrity of your knuckles.

And in the end, you might decide to self-publish your book.

7. Believe it or not, life gets in the way. It might sound like something out of The Twilight Zone, but clients disappear all the time. Seemingly reliable clients disappear. It never ceases to amaze me how often people who decide to write a book lose a parent or a spouse or a child.  Or how often they become stricken with a disease themselves.  Or how often they get struck by financial ruin or divorce or some other calamity … or simply vanish without a trace.  Yes, people have vanished into thin air several times!*

In fact, if insurance companies had access to ghostwriting client data, the mere desire to write a book would become justifiable cause for them to refuse all personal, health and injury insurance right now on the spot, as well as life and health insurance of everybody related to you. Your writer is not prepared to do a month or two of work for you and hope you’ll stick around, ignoring everything else in your life. 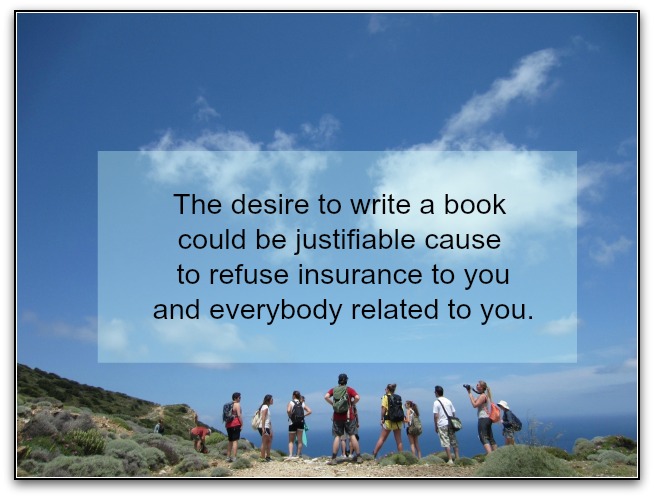 8. Business is business. If you are planning to sell your book once it is written, you are undertaking a business venture. Every business venture requires start-up capital. Even a chip wagon or a hot dog stand.

What makes this business venture (writing a book)  financially attractive is that it costs peanuts to get in the game. You will pay 10 – 50 times as much for a fast food franchise.

Where does that start-up capital come from?  Not from your writer?  She needs to be paid for her work.  Any deferred payment would in fact be loaning you start-up capital.  And, as mentioned above, that’s what banks are for.

9. Our writers are professionals, not college students writing on the side to puff up their resumés. Please treat them like professionals.  That means pay them, and pay them on time.

There are surely many more reasons our writers don’t want to work for free, on the off-chance that at some point in the future they might get paid.   Those reasons are personal, but think about your own reasons – why do you not work for free?  Your answers might shed more light on the issue than all the reasons I have listed above.

* One client vanished into thin air a few years ago.  He was a really nice gentleman, and he simply stopped responding to emails, which eventually started to bounce.  His phone line was disconnected.  He had simply vanished.  Eight months later, he contacted us again. A car crash, a marital breakdown, a move to a new city…he was a survivor and he was ready to finish his book. He was a rare breed, because most MIA clients never turn up again.