How much should you plan your plot?

Fiction writers need to plan their plots. They need to be organized. But should they also allow their characters and the plot to develop on their own?

Most people coming to us to help them write their manuscripts are first-time writers. They often don’t know where to start, or have started and are not sure where to go next. One really good question is “How much should I plan my plot?”

I won’t know until I start writing it.

This question actually sprung to mind thanks to Brandy Moss, an author who asked the following question on Google Plus (and you can read the feedback here):

So I finally finished Chapter 13 and let a couple friends who had been waiting on it, read it. Immediately after they finished reading, they both had the same question….. “What happens to Troy?!”I count it a good thing that I left enough of a cliffhanger at the end of a chapter that they want more, but is it bad that I can’t answer their question? Hell, even I have nothing but the vaguest idea what happens to Troy. And I won’t until I start writing it.Do others write like that? Or is it just me who lets the voices in my head tell me the story as we go instead of outlining some grand plot?

As a basis for starting work on your manuscript, the more organized you are the better. An outline of the chapters and what you want in them is helpful. You can do this yourself, or if you are hiring one of our ghostwriters, you can have her do it for you. The same goes for character development. And choice of location.

The more you have a specific vision, the more detail you should create. Otherwise, you will make it up as you go along, or your ghostwriter will.

Is making it up as you go along all bad?

It is interesting that on the same day that Brandy Moss asked her question, JK Rowling lets out her own misgivings about having followed through on early plans for her characters, rather than allowing them to develop the way they would might naturally have developed. 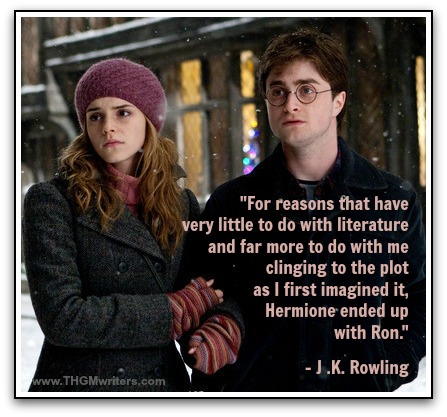 To quote The Sunday Times:

IT WAS the romance every Harry Potter fan wanted to see. Now JK Rowling has admitted she got it wrong by pairing off Hermione Granger with Ron Weasley rather than her franchise’s hero.

But it also shows that even with the most successful franchise in history, there remain questions of how how much planning and how much flexibility is enough.  The answer does not stop with the author, either.  CNN reports on how fans weigh in on both sides of the debate.

Question of the day

That leaves us with the question of the day: “How much should you plan your plot, and how much should you let it develop on its own?” Please feel free to own experience as a writer/author in the comments below.