Poetry and Rhetoric in Washington DC

How do you inspire a divided nation to unite around a common cause? With poetry, of course.

The world was held spellbound on January 20, 2021, as a 22-year-old read poetry composed almost up to the last minute for Joe Biden’s inauguration.

There have been only seven inaugural poets in US history. Amanda Gorman is the youngest. And two weeks prior to her recital, she was still struggling to put it all together.

As she began reciting “The Hill We Climb“, I found myself confused. Yes, there was poetry in her words. But was I also hearing a speech? Maybe a political speech? Perhaps a motivational speech?

Some parts read like poetry. But others sounded more like words that might have fit well into the President’s own speech, or Amy Klobuchar’s opening remarks. 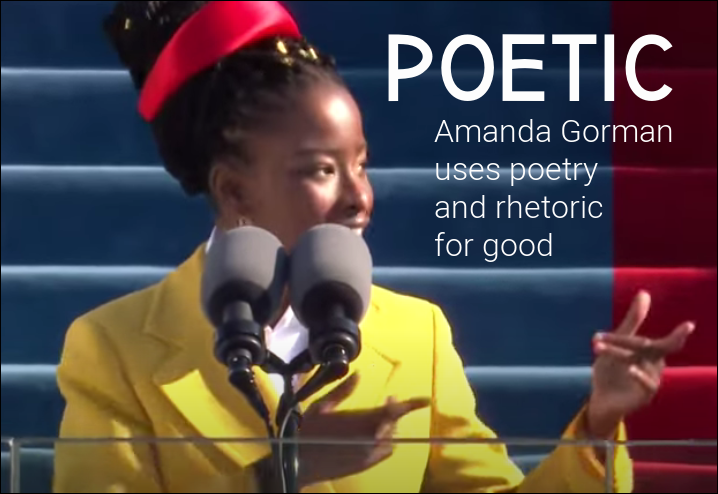 In fact, the resemblance of Ms. Gorman’s poem to a speech is no coincidence. She prepared for the event by studying how “rhetoric has been used for good” in the past. Rhetoric is a device most often used in political speeches.

And she looked to some great speeches for inspiration. As NPR put it:

She also took her cues from orators like Frederick Douglass, Abraham Lincoln and Martin Luther King, Jr. — people who knew a thing or two about calling for hope and unity in times of despair and division.

Gorman told NPR she dug into the works of those speakers (and Winston Churchill, too)…”

As she spoke, the parallels to Martin Luther King’s famous “I have a dream” speech rang out clearly. Consider these words from her poem:

“We will rise from the gold-limned hills of the West.

We will rise from the wind-swept Northeast where our forefathers first realized revolution.

We will rise from the lake-rimmed cities of the Midwestern states.

We will rise from the sun-baked South.

We will rebuild, reconcile and recover in every known nook of our nation, in every corner called our country our people diverse and beautiful will emerge battered and beautiful.

Here is how Martin Luther King put it:

“So let freedom ring from the prodigious hilltops of New Hampshire.

Let freedom ring from the mighty mountains of New York.

Let freedom ring from the heightening Alleghenies of Pennsylvania.

Let freedom ring from the snowcapped Rockies of Colorado.

Let freedom ring from the curvaceous slopes of California.”

I commend Ms. Gorman for drawing inspiration from both Martin Luther King and Winston Churchill, the two orators I drew on for this speechwriting tip in a blog post almost one year earlier to the day.

But neither of those orators were the first inspirations I noticed. Right near the beginning, she said, “a nation that isn’t broken, but simply unfinished.”

At this point, almost a minute into her recital, I was already feeling her cadence slipping into that of Lin-Manuel Miranda’s particular style of rap. Now, I raised my eyebrows, certain that I was hearing “America, you great unfinished symphony” from Miranda’s Hamilton: An American Musical.

By two-and-a-half minutes in, I knew I was witnessing a Hamilton appreciation event. She said, “Scripture tells us to envision that everyone shall sit under their own vine and fig tree, and no one shall make them afraid.” Although George Washington quoted this Bible verse numerous times, many people know it best through its appearance in Hamilton.

And the Hamilton cadence continued pretty much the whole way through.

Of course, what are song lyrics, rap included, but poetry? She followed two great singers, Lady Gaga singing the national anthem and Jennifer Lopez singing “This Land is your land”, each one bringing goosebumps to listeners’ skins.

What was undoubtedly poetic was Ms. Gorman’s delivery, as she flashed her smile, and conducted with her fingers in the air, just enough to give a gentle sense of occasion to her words. The delicate touch was called for at an event where her message, like everybody else’s, was about healing a divided nation.

If so ethereal a performance didn’t suit one’s sensibilities, one more poet would follow her – Garth Brooks singing “Amazing Grace” just as delicately, but appealing to those who might not like their poetry to sound so much like, well, poetry. His words echoed the theme of the day:

“Now if I can ask you to sing this last verse with me, not just the people here, but the people at home, at work, as one, united.”

You might not be able to write poetry like Amanda Gorman, but you can deliver inspiring words. You can make a difference when you get up to speak. And if you can’t find the right words, our speechwriters can help.