Speechwriting is a special skill. And political speeches require an extra layer of understanding.Most of all, they require authenticity.

What is the most important feature of a political speech?

Our speechwriters capture the essence of who you are, and that makes your speech authentic.

This is the one key ingredient that makes a political campaign successful – an ingredient most candidates overlook.

George Bush Junior became President of the USA despite sounding hokey, despite malapropisms, despite the mockery of the media elite. Why did so many people vote for a man who faced scorn and derision in the media? Why did they vote for him twice? Because his hokey style was authentic. People felt they could trust him, that he was revealing himself to them. He was not pretending to be someone he was not.

Barak Obama was not supposed to succeed George Bush as President of the USA. A lot of people forget this, but at the time, everyone was asking whether the United States would have its first female President. Not to take anything away from Hillary Clinton, but she failed the authenticity test. People felt she was trying too hard and was not revealing her soul to them. 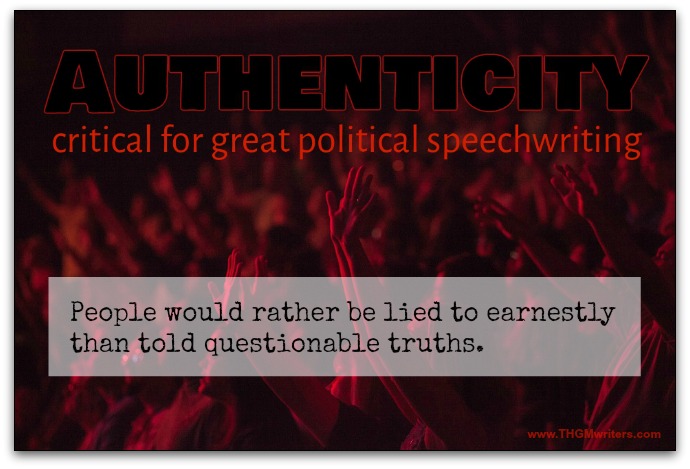 Have you ever wondered how thousands of people could fill a stadium and cheer on Donald Trump, even as he tells lie after lie that even a kindergartener could see through? The answer is simple. He speaks with conviction. True or false, this is what he means, and people would rather be lied to earnestly than told questionable truths. If all politicians lie (an assumption that most people accept as a truism), here is one who isn’t sneakily hiding it.

Those people in the stadium don’t worry about whether they can trust what says. They trust him.

Not every speechwriter can create authenticity.

Not every speechwriter can create authenticity. The writer has to be able to capture the “you” in you.

The writer has to be able to capture the “you” in you. She will need more than just information, she will need to understand you. She has to take the time and effort, and have the skills to craft a speech the displays not just vision and leadership, but equally your authenticity. Your audience will feel the connection and will warm up to you, not just to your message.

Your message is important. But it can only reach your audience through the vehicle of authenticity.

It’s not just the text of the speech. It’s also the delivery. You have to speak like you mean it.

I am not suggesting that you tell lies. You just have to make sure that your truths ring true by being authentic, by speaking like you mean it and by using a text that matches your style and whom you are.