Proofreading saves body parts! How a lady’s chest went up for sale online

Women are being sold on the Internet, one piece at a time. It’s a tragic dismemberment that could be avoided simply by proofreading what you write.

I’ve written before about the dangers of not proofreading carefully. For instance, one celebrity chef became a cannibal, all because somebody forgot a comma. Such a tragedy, really.

Then there was the time I nearly accepted a position as a hitman, a murderer. Thank goodness for proofreading.

Now I learn that people are accidentally selling their used body parts, all because somebody didn’t proofread carefully enough.

What’s the world coming to? All because somebody didn’t proofread. 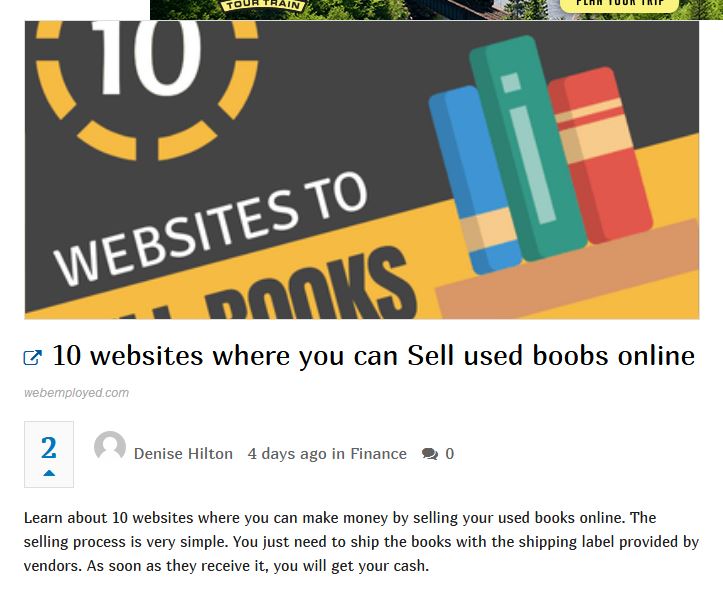 If you missed it, look again at the text below the image:

“10 websites where you can Sell used boobs online”.

This is no laughing matter. An accidental B where a K should be means that your body parts could be sold to the highest bidder. They might be on the Internet right now, being sold to an offshore used body parts merchant.

I totally understand that some top-heavy people might want to offload some of the extra weight. Fair enough, if that’s your plan.

But for your body parts to go on sale on the Internet by accident through carelessness is inexcusable.

The sad thing is that you you could keep your body parts intact. You don’t have to sell them. We can offer protection by proofreading what you write.

Yes, we can save your body parts from being accidentally exploited for cash.

Note: Presumably, a proofreader would have caught the faulty capitalization, too. But that’s just a bonus to saving one’s used body parts.

Second note: used body parts? That made me wonder, too.