Proofreading saves lives! How I almost became a hitman by signing a murder contract

Never publish anything without proofreading. Ideally, have several people proofread. Here is a a case study of how proofreading saved me from becoming a hitman.

This is a true story. I was reviewing a contract recently, full of the usual legalese, when I came across something most non-usual:

“Where it shall appear to the partners that this Agreement, or any terms and conditions contained in this agreement, are in any way ineffective or deficient, or not expressed as originally intended, and any alteration or addition shall be deemed necessary, the partners will enter into, execute, and perform all murder be an instrument as their counsel shall advise. Any addition, alteration, or modification shall be in writing, and no oral agreement shall be effective.”

Did you miss it? OK, here is the abbreviated version: 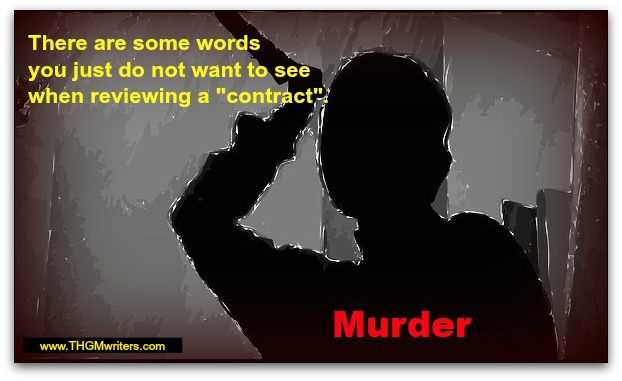 OK, clearly something went wrong in that paragraph. In fact, my best guess is that two things went wrong.

First, it looks like a bad cut and paste left out a few words, because the end of that sentence doesn’t quite fit onto the rest of the sentence. Like trying to sort through the plane crash debris and placing Julia Roberts head on Hulk Hogan’s body (Yes, as a matter of fact I did have a troublesome sleep last night – why do you ask?).

Second, at the junction between the two parts of the sentence, we discover a murder – probably a spell-check anomaly as a result of the bad cut-and-paste. But it still leaves us with some important questions unanswered:

READ ALSO: How a typo turned a celebrity chef into a cannibal

So protect yourself from murder and other unintended consequences by proofreading your texts. If you need help, we can proofread for you.