She Knows What the Future Holds is published

Another client of THGM Writing Services publishes her book. She knows what the future holds is a new novel by G.G. Irvine. It’s a classic tale of country girl meets big city.

We are excited that She knows what the future holds: A Novel by G.G. Irvine has been published. This is another book that we helped the Swiss-based author to perfect. We hope you’ll enjoy this entrancing chick-lit odyssey, which she describes as “a girly book”.

Here is a quick synopsis of the novel: 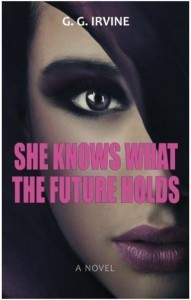 Growing up, April Byrd longed for more than her very ordinary life. She was born and raised in a sleepy, small Midwest town where she spent her whole life waiting – waiting for something big to happen. When college graduation provided an escape, she knew just where to go – New York City. There she could reinvent herself and finally have the extraordinary life she’d always dreamed of. She said goodbye to her family and high school sweetheart for the bright lights of the big city.

But things don’t always go as planned. Getting to New York City was the easy enough, but nothing has turned out the way she planned. April shares a one-bedroom, walk up apartment where she sleeps on the worn, living room, sofa bed of her wild, party-girl roommate. She has a grunt job at a public relations agency, and eight months after her arrival to the “big city,” April’s life is still completely ordinary; until an uneventful visit to a psychic changes everything – starting with a certain sexy, blue-eyed, tattooed rocker named Van who never even knew she existed. Until now.

Now that April’s on Van’s radar, her life will never be the same. He’s a mysterious, captivating, bad boy and April is helpless to his charms; but she can’t figure him out. Does he really like her, or is she just another conquest? As she follows Van down the rabbit hole, she begins to realize his mysterious air just might be a façade masking a darker, more disturbing side.

You can get a copy of the book yourself on Amazon: She knows what the future holds: A Novel.

And if you want a novel written, check our our book writers.