Repetition is a powerfully persuasive tool. Here’s how to make any speech (or article or blog post) more persuasive.

My fellow Doctor Who fans will instantly recognize “The Power of Three” as an episode in which Earth was invaded by an infinite number of seemingly identical cubes.

That’s repetition for you.

In speechwriting, or in any persuasive writing, the Power of Three takes on a more practical meaning. You can drive home your point more effectively by saying three short sentences, each one similar, but each one different.

Let me offer an example, before explaining why this is so effective.

You remember the most important things.

You remember the most recent things.

You remember things that are repeated most often.

Those three lines all share the same construction. They are all short. They all start with the same two words. This is technically called “anaphora“, a type of parallelism. It is among the oldest of literary devices.

The short sentences in our example, starting with the same words, follow in short succession. So they are all obviously part of a series. I could have written them like this:

You remember the most important things, the most recent things and things that are repeated most often.

How does repetition work

Do you see the difference? Can you tell why the three sentences are more effective? If it doesn’t hit you right away, stand up. Clear your throat. Imagine an audience, and read both versions out loud, just as if you were delivering a speech. Stop at each period, just long enough fr the point to sink in. See what I mean?

A number of things happen when you separate the three points.

First, each point gets its own attention. You give your audience (or readers) the chance to actually hear each item.

Second, you give importance to each item, by introducing each one separately. That alone makes people sit up and listen more carefully. “Ooh, the speaker is saying something important!”

Third, you are repeating yourself. I know, I know…you’ve probably been told not to repeat yourself. Or you’ve been told to find synonyms so as not to always use the same word.

That works for literature.

It doesn’t work for persuasive writing or speaking.

For the same reason it doesn’t work for song writing. Have you ever noticed how the most popular songs are built?

They repeat the same words.

They repeat the same tune.

They repeat the same structure.

Only the bridge changes to provide some variety and launch listeners into the final round of the same words, tune and structure.

Songs get into our heads. When you speak, when you want to persuade, the same principles apply. Repetition creates a rhythm, and people like rhythm. Rhythm gets into their heads.

What’s so special about the number three

But why three times? Why not make six or seven points in a series?

Indeed, why not? There is no rule that you can’t, and sometimes a longer series of points works very well.

It works especially well when you know you have their complete attention.

But mostly, it works especially well when each point adds fresh information – new ideas for the audience or reader to consider. That’s the case in the examples I’ll be sharing with you below.

The number that seems to work best when you just want to make a point is three. There is some interesting research on how three helps memory, but that’s not why it works.

You need three to make a pattern. Two of anything is not a pattern. The third item in a series establishes a pattern. After that, people settle into the pattern. The longer they are in a pattern–any pattern–the more we take that pattern for granted and less we notice it.

The longer we smell something, the less we smell it. Perfume is strong at first, then we stop noticing it.

The longer we hear something, the less we hear it. Your refrigerator makes quite a noise, but normally you notice it only when the electricity goes out.

The longer we see something, the less we notice it. There are things in your house, lying in plain sight, that you have forgotten about.

The longer you speak with a specific pattern, the less effect it will have.

So repetition to make a single point, needs just a pattern of three. Then stop. Repetition that adds significant information each time, can go on a lot longer – as long, in fact, as there is new information to add.

Therefore, here are a few rules:

Parallelism is a literary device

OK, it’s confession time. The examples I gave are not technically repetition, at least not as a literary device. Yes, they repeat a pattern, but not the words. This is actually called “parallelism”, and, as I mentioned earlier, it is more specifically called “anaphora”.

Repetition works well, too, by the way. You can emphasize a point by saying it, pausing, then saying it again. You can even help people by saying, “Let me say that again,” or “If you remember nothing else from this speech, remember this.”

You can even have everybody repeat it back to you, when you have a live audience. Teachers do this most effective. Motivational speakers sometimes do this, finding also a way to take people just beyond their comfort zone with a bit of humor.

Parallelism can be used a little more frequently than pure repetition.

Let me leave you with two famous speeches that use the parallelism literary device. 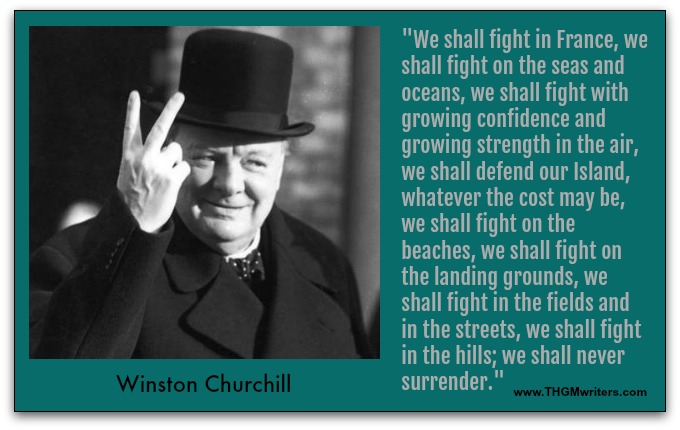 See how effectively Winston Churchill used it in his most famous speech from World War 2, when he says that “we shall fight”: 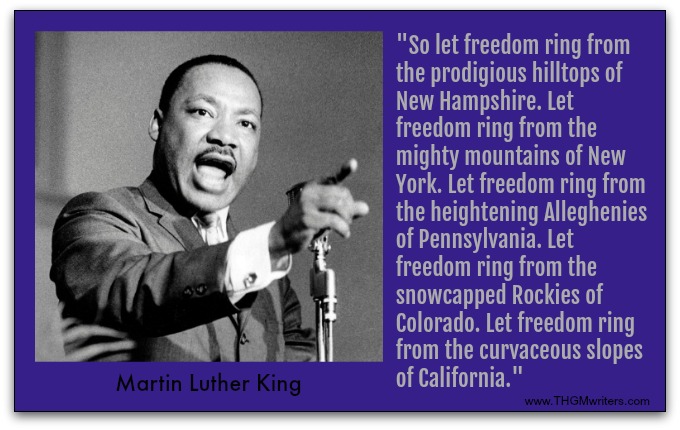 Another great example is this excerpt from Martin Luther King’s famous “I have a Dream speech:

By the way, he also repeats the signature line, “I have a dream” several times in his speech. But that would require a much bigger quote, as the line starts a long paragraph each time he says it.

So don’t be shy to repeat yourself, especially when you speak.

Most blog posts are a lot like speeches. They are short and focused on one overall message. They usually try to persuade, even if they are informative.

There is a point where your blog post will try to get across how big a problem something is. Or how important it is to follow certain steps. Or how difficult or satisfying or confusing something is.

The power of three or anaphora can be a very compelling device. Unless you use the Yoast plugin. Yes, as a matter of fact, I do feel a rant coming on.

I’ve guest posted in a few places where the Yoast plugin rates the post on a number of factors, bringing up red flags for things one is supposed to correct.

My posts almost always get flagged for starting too many sentences in a row with the same word. Du-uh! That’s the way it’s supposed to be. That’s what an anaphora is for.

But that should not come as a surprise. The same goes for any big organization. Corporate executives will typically edit out devices like repetition, because they’ve probably been told not to repeat themselves.

OK, enough ranting for now. You know what you have to do. Decide what points you want to emphasize in your next speech, article or blog post. Then apply the repetition device called “anaphora” to drive your points home. Harness the Power of Three (or more!).