The stripper’s guide to writing

Mila Kunis should have been a stripper in Jupiter Ascending. Every story needs strippers – and it’s not what you’re thinking.

I love the movie Jupiter Ascending.  It has plenty of action and plot twists.  We are left guessing who is doing what, and just what their motives are.  And then there are the moral quandaries to contemplate.  And, of course, there is romance.

But there are no strippers. Every story needs strippers; let me explain.

As much as I enjoyed watching the film – great concept, exciting storyline and amazing special effects – there are a couple aspects that seemed rushed, as if the film was adapted from a book and had to be cut down to fit into two hours (127 minutes, actually).  However, it is not based on a book.  So what’s the rush?

For one thing, Jupiter (played by Mila Kunis) doesn’t seem too bewildered to suddenly go from being a toilet-cleaner to becoming a princess.  Yes, she protests and furrows her brow, but it somehow seems like she is going through the motions.  She quickly accepts the situation, failing to find all this upheaval very destabilizing.  I am not the only one who noticed this.

But it is the other rushed aspect that I want to address here. At one point, she makes an unexpected pass at her protector, Caine (played by Channing Tatum).  It’s not just the pass that is unexpected, either; she makes a speech about how she always chooses “the wrong men”.

The scene feels as if she had just dropped her clothes unexpectedly in front of dinner guests.  There is simply no foreshadowing.

A good stripper knows that you have to start by taking off your fancy gloves.  Or your necklace.  Then loosen your hair and shake it around a bit, then run your hand up your arm and show a little shoulder.  This is called foreshadowing.  This builds anticipation.  This gives the audience a sense of what to expect, so that even before they see more, they are already anticipating it.

Mila Kunis doesn’t slowly undress for us.  She just strips herself naked – metaphorically speaking, of course (Sorry Guys, you do not get to see Mila Kunis strip in this movie). But don’t blame Mila; her acting is fine. The problem is the script.

Given that this is such a great movie in so many ways, it is a pity to see it panned so much with comments like this:

“but instead we get scenes like ones where Mila Kunis gives a long-winded and out of place speech on how she always chooses the wrong men.” 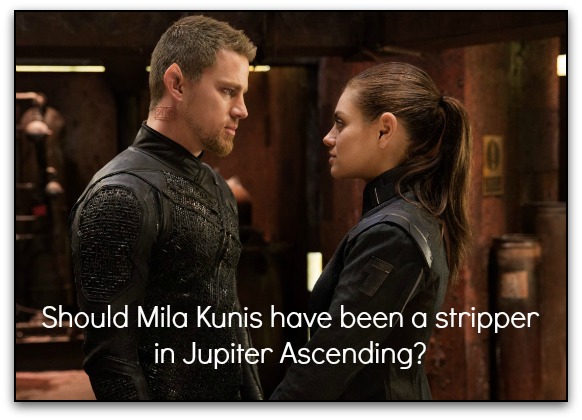 The easy fix would have been to soften up the pass, and simply removed the “speech”.  It was not all that long-winded, but it sure was out-of-place.  That would be my choice.

But let’s say, just for argument, that you really wanted to include that scene as it is, could it have been foreshadowed?

Sure.  The pass itself could have been foreshadowed with some earlier reactions of awkwardness when Caine has his arms around her as protector.  We could have seen the conflict in each of their eyes between their official roles and their growing sense of attraction.  It is that growing sense of attraction that was missing, and that does not take time; it just takes some eye movement and head inclinations.

As for the “wrong men” speech, there could have been a scene earlier where Jupiter receives a threatening call from an ex-boyfriend.  Her mother or aunt could have asked “Where did you dredge up this one?”  And she could have responded, “I know.  I know.  I always go for the wrong men.”

These script changes could have been done without costing any time. In fact, my preferred option – to cut the speech and soften the pass, would actually reduce the film time.

That’s how a stripper would write the story, revealing first her intentions, hinting at what she’s about to do, rather than just dropping all her garments to the floor in one fell swoop.