The 1 trait every ghostwriter needs

Just one thing separates a ghostwriter from other writers. Without this trait, you simply cannot ghostwrite.

So they turn to ghostwriting.

You might be a writer thinking about ghostwriting, and wondering if you could make a living from it.

The short answer is “yes”, but only if you have one specific trait. I will reveal this trait by telling a story. Why a story? As a writer, I am sure you know that some things just can’t be explained academically. Some things can be explained only through a story. 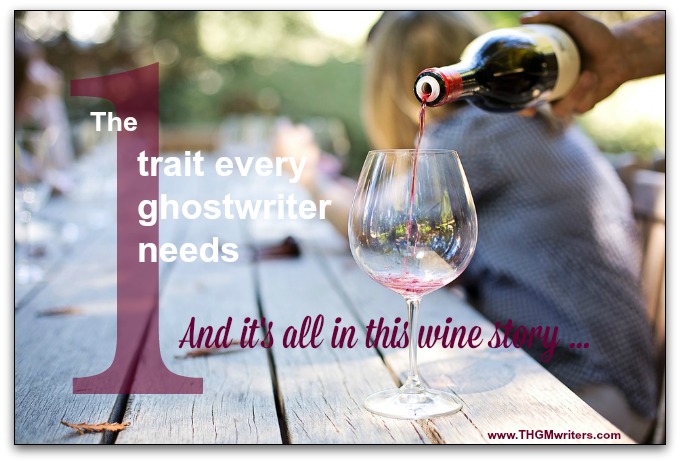 A ghostwriting story 8,000 years in the making

This is the story of a client. The story itself began 8,000 years ago. That’s 2,500 years before Mr. and Mrs. Wheel launched their famous invention, by the way. In a fertile valley amid the Caucasus Mountains, Mr. and Mrs. Wine released their equally famous invention. Yes, the first wines were born.

People came and people went. Wars raged across the land. People had a lot of fun making babies. There were famines. There were times of plenty. And still wine was being cultivated, new varieties of grapes were created and/or discovered and a few people remained sober enough to tell the story.

I’ll skip over all that boring stuff about wars, famines and making babies. Fast-forward to 2018. A new winery is opening up in this amazing Cradle of Wine. Old varieties of grapes are being restored. Ancient methods of making the wine are being revived. And the vintner wants me to help them tell their 8,000-year-old story.

As you can tell, it’s an exciting story.

Obviously, the vintner had chosen the ideal writer in me – someone who can get excited about wine. In fact, here is what she said after I first responded to her query:

“Thank you for responding so fast. I got feeling from your letter that you are not only professional in what you do, but also in wine business too. Because of this, it was not very difficult for me to make my choice.”

Well, I’ve never been in the wine business. But I had recently written an email mini-poster to invite people to a wine-tasting event.

So I was hired totally on the strength of my love for wine, right?

Confession time. I almost never drink any alcohol. Maybe once or twice a year. And I don’t know all that much about wine (although I do know a little).

But she was right in choosing me. I was the ideal writer. In fact, when she saw my first draft, here is what she had to say:

“I absolutely love what you wrote… The style is brilliant!”

A ghostwriter gets excited about someone else’s message

Every writer enthuses about their own story. But ghostwriters get excited about someone else’s story.

Interestingly, I reviewed my client’s closest competitors. One of them told a great story that I would have been proud to write. Another’s website was just embarrassing – a mundane text that was not written by an English-speaker.

A third was “well written”, but did not inspire. The research was solid. There were mentions of the science of wine-making. A few emotional words were included to try to capture the reader. But no wine-lover would feel inspired and get excited by reading what was written on that website.

The reader won’t get excited if the writer isn’t excited.

You are always excited about your own stories. Can you get excited about a stranger’s story – excited enough to suck the reader out of their own mind and draw them right into the story? If so, you might make a great ghostwriter.

Filed Under: The writing business