14 of the most useless words in the English language

Sometimes we throw in extra words that add nothing to the meaning of what we are writing. They make it harder to read your article, book or report. Here are some of the most useless words in the English language.

If you want to be clearly understood, write in plain English. Don’t use big words just to sound important. And don’t throw in these useless words that add nothing to the meaning of the sentence.

JUst throw them away!

This useless word gets thrown into sentences all the time. Here are two ways it is thrown in for no good reason: 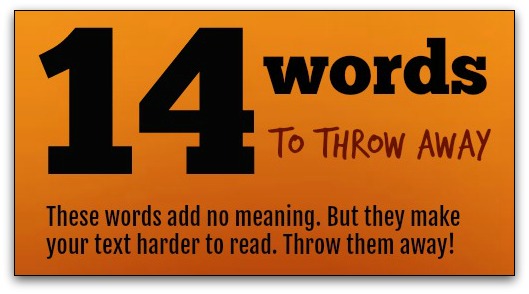 This is another useless word thrown into sentences in two ways similar to “available”.

Words like ‘applicable’ and ‘available’ are useless. Throw them away!

People throw this useless pair of words into a sentence to say that what they are saying is true.

Sometimes, they use it to contrast with an imagined truth. For instance, “I thought that they were angels, but in reality, they were aliens.” Hat tip to Styx. In such cases, there might be a reason to use “in reality”. Even so, read that sentence again without “in reality”. The more succinct sentence still works, so it’s your choice.

These useless words get thrown into so many sentences. There is such a simple test for this. Read the sentence without these words to see if it makes sense. It always does. Unless you are comparing the essence of something to its non-essence, the word has no use. And when was the last time you did that? Throw it away!

This particular useless word is often not needed. In fact, this word is not needed. Two sentences. Same meaning. It’s not a particularly useful word. Throw it away!

Remember that when you write, people have to read. Don’t torture them with useless words they have to skip over. Else, they might choose to stop reading, and then you’ve wasted your time writing.

Remove the useless words from your reader’s path. Throw them away!