Who hires a ghostwriter, for a book or speech or…?

Everybody knows that some people hire ghostwriters. But it might surprise you to discover who some of those “some people” are.

This might seem an odd question – “Who hires a ghostwriter?” – and yet there do appear to be some popular misconceptions about who hires a ghostwriter. Most people have a vague idea of who works with them, but few people are really aware of how widespread their services are.

Everybody knows that ghostwriters write biographies

The most popular view is that only famous celebrities use ghostwriters. For instance, many people are aware that a former President would be likely to hire a ghostwriter to write his memoirs for him.

And few people expect a sports legend to have a deft-enough command of the English language to pen a spell-binding account of his life.

As for actors and singers, many people are aware that they are too busy and usually not gifted enough in writing skills to create the engaging tell-alls that the world-at-large craves.

But celebrities are not the only ones who use ghostwriters to prepare their biographies. In fact, biographies are the single most-common writing query we get. And although we have written some minor celebrity biographies, the volume of queries is not due to a lineup of celebrities outside our door. 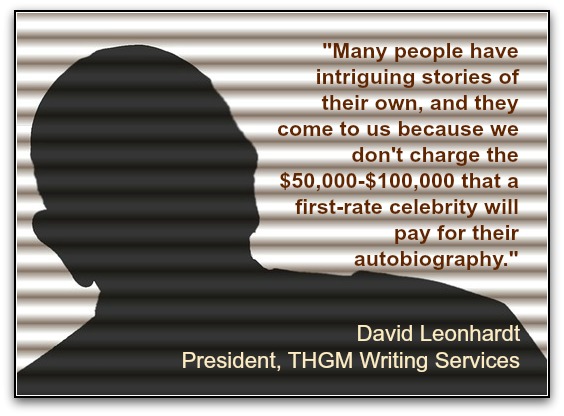 So who uses ghostwriters?

It might surprise you to know that many people have lived exciting lives building businesses, escaping from crime gangs, challenging the government, being falsely accused of a crime or overcoming a great personal challenge. Many people have intriguing stories of their own, and they come to us because we don’t charge the $50,000-$100,000 that a first-rate celebrity will pay for their autobiography.

But many people also come to us with requests to write a biography of somebody else, often a parent of grandparent with heroic war stories or tales of escaping from tyranny.

And sometimes people come to us to write biogapahies of people they admire or of the founder of their company. Sometimes it’s hard to tell if we are writing a personal biography or a company history, but that’s OK; in many cases, the two are two intertwined to pull them apart.

When the President stands up to give his State of the Union Address, most people assume that the thoughts and ideas are his own, although most likely involving a lot of bartering and compromise with various political elites. But most people are also probably aware that a ghostwriter on staff has helped him find just the right words to convey both the meaning and the feeling he is trying to portray.

Similarly, when the President of Exxon or Wal-Mart or AT&T or General Motors stands up to address stockholders, few people assume that a busy person like that spent hours to carefully crafting his message and massaging the text.

But did you know that people like you and me also hire ghostwriters for speeches. When people are honored at awards banquets or are chosen to lead volunteer organizations or, most unnerving of all sometimes, are asked to serve as Best Man at their friend’s wedding, they don’t always know what to say, or how to say it best. Best Man speeches are among my personal favorite writing jobs.

Blogs come in all shapes and sizes, but most can be divided into two categories: those written by a blogger on his own behalf, for personal or professional purposes, and those written on a company’s behalf, where the individual blogger is of little matter.

Did you know that some fiction authors hire ghostwriters to write their novels?

Probably not. In fact, I suspect that most people would be shocked and scandalized to find that their favorite author is not actually the writer. But there is a difference between being an author and being a writer. We get lots of fiction-writing queries from people who have developed intriguing plots and even created whole fantasy worlds…but they just can’t spin a story well enough to grip their audience.

Put it this way, suppose you were to find out that your favorite author was the story’s creator, but not the actual writer…would you rather that the story had never been brought to light? So we ghostwrite fiction.

We have been hired to write humor and adventure and historical fiction and science fiction and fantasy and children’s stories and even stories that don’t easily fit into a category.

Anything can be ghostwritten

There are many other reasons to hire a ghostwriter, such as for a press release or a pamphlet. In those cases, nobody even distinguishes between “writer” and “ghostwriter”, since a name is not normally attached to the work. A ghostwriter can also write songs and plays and movie scripts.

There is only one type of project we refuse to ghostwrite, and that is school assignments. Sorry, but we don’t do your homework for you. We refuse to cheat anybody out of an education, even you.

So, were you surprised to learn who uses ghostwriters?