If you plan to self-publish your novel, the most important thing you will ever write is the cover blurb for your book. Here’s how to do it right (with examples from top authors of the 21st century).

If you self-publish, you have to do it all. That includes preparing the cover of your book. Just as the packaging helps sell crackers and cereal, the cover sells the book.

Yes, people do judge a book by its cover.

A cover is more than just a title and an image. On the back, people read the author’s bio. They read the reviews. They look at the author’s picture. But most of all, they read the back cover blurb. Those few lines answer the book buyer’s critical question:

“What’s this book all about?”

But that’s not really the question the buyer is asking. The real question is:

“Is it worth my time and effort (and money) to buy this book?”

Your back cover blurb is what they will use to decide whether to buy your book or to move on to the next book. So let’s get it right.

TIP: Here is a tip that few people follow. It is a powerful tip. Write your blurb first. Yes, before you write the manuscript. Perfect the blurb. Make it so drool-worthy that everybody will want to buy a copy of your book. Then, and only then, write the manuscript that fulfills the promise. Chances are, you will write a better book if you let the blurb guide you.

How to write a cover blurb for a fiction book 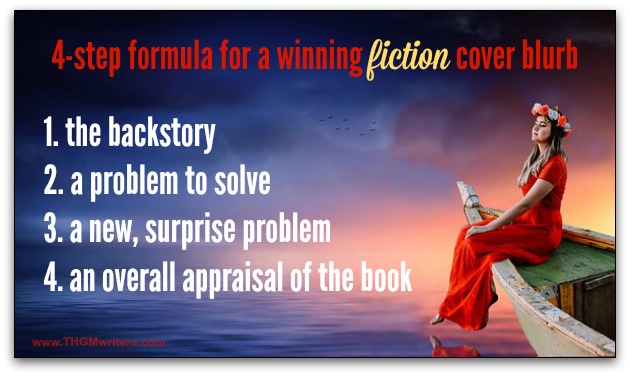 There is no rigid formula for a fiction cover blurb, as there is with query letters. However, there are some similar patterns that have proved successful. Here is one formula you can follow:

A fifth element is about you. If you are a best-selling author, you might want to open with that information, then dive into the situation. If you don’t sound quite that impressive, you might include yourself in the final paragraph.

Otherwise, you can just add a couple lines about yourself next to a head shot below the blurb.

The backstory tells about the situation at the start, or even before the start of the book. It should introduce the protagonist.

The problem should set up the quest.  The problem is the reason for the story.

The surprise problem should cause great concern, with the quest and/or the protagonist’s life and/or the universe itself hanging in the balance. It’s what makes the story interesting.

By the end of the blurb, readers should fall in love with the main character. They should feel invested in his or her quest, and/or survival.

The goal of the fiction cover blurb is not to tell it all. No spoilers, please. The goal is to make the book buyer thirsty to find out more. The blurb is not a summary. It is a teaser.

The back cover blurb is not a summary. It is a teaser.

Use the most effective writing style

Your writing style is important. You have very little space, and book buyers have very little patience. Keep it short. Be concise.  Try to keep the whole thing under 100 words. You don’t want readers to have to “Click to view more” at online bookstores. I have seen recommendations to keep it under 250 words.

Keep it scannable. Out with 20-word sentences! Short sentences. Short paragraphs. Don’t make people work too hard to read your blurb. There’ll be time enough for reading once they’ve paid for the book.

Use words that readers expect. Presumably this language will mirror what you’ve written on the inside of the book.

If you are writing romance, readers will expect words like “desire”, “forlorn” and “heart”.

If you are writing fantasy, readers will expect words like “land of”, “magical” and “surreal”.

If you are writing mystery, readers will expect words like “clues”, “mysterious” and “crime”.

Meet your customers’ expectations. If you don’t, they will be confused. Confused readers don’t buy. If somebody is checking out a dystopian sci fi novel, they expect to see dystopian language. Give the people what they want!

Here are a few things not to do:

If this all seems too much, don’t worry. We can write your back cover blurb for you when we write your fiction book.

Sample cover blurbs from this century’s most successful novels

Let’s look at a few samples fiction cover blurbs from some of this century’s most successful novels (so far). Why not learn lessons from this century’s great authors? 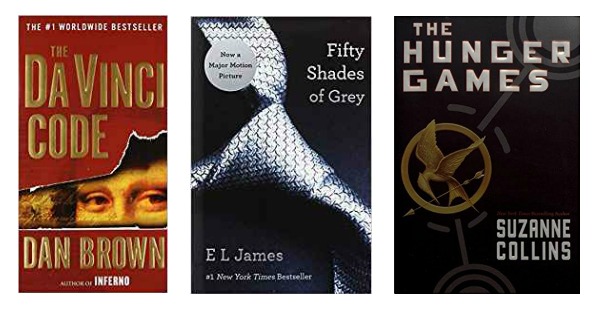 The first is from Dan Brown’s The Da Vinci Code. You won’t find this on the back cover now, but it was on the original edition. I know it’s way too long, (264 words) but this is Dan Brown we are talking about, right?

While in Paris on business, Harvard symbologist Robert Langdon receives an urgent late-night phone call: the elderly curator of the Louvre has been murdered inside the museum. Near the body, police have found a baffling cipher. Solving the enigmatic riddle, Langdon is stunned to discover it leads to a trail of clues hidden in the works of da Vinci…clues visible for all to see…and yet ingeniously disguised by the painter.

Langdon joins forces with a gifted French cryptologist, Sophie Neveu, and learns the late curator was involved in the Priory of Sion—an actual secret society whose members included Sir Isaac Newton, Botticelli, Victor Hugo, and da Vinci, among others. The Louvre curator has sacrificed his life to protect the Priory’s most sacred trust: the location of a vastly important religious relic, hidden for centuries.

In a breathless race through Paris, London, and beyond, Langdon and Neveu match wits with a faceless powerbroker who appears to work for Opus Dei—a clandestine, Vatican-sanctioned Catholic sect believed to have long plotted to seize the Priory’s secret. Unless Langdon and Neveu can decipher the labyrinthine puzzle in time, the Priory’s secret—and a stunning historical truth—will be lost forever.

In an exhilarating blend of relentless adventure, scholarly intrigue, and cutting wit, symbologist Robert Langdon (first introduced in Dan Brown’s bestselling Angels & Demons) is the most original character to appear in years. The Da Vinci Code heralds the arrival of a new breed of lightning-paced, intelligent thriller…surprising at every twist, absorbing at every turn, and in the end, utterly unpredictable…right up to its astonishing conclusion.

The formula he used?

That is pretty much the standard formula so many authors use, just a little long-winded.

Let’s look at another. Here is the back cover blurb from Fifty Shades of Grey (152 words).

When literature student Anastasia Steele goes to interview young entrepreneur Christian Grey, she encounters a man who is beautiful, brilliant, and intimidating. The unworldly, innocent Ana is startled to realize she wants this man and, despite his enigmatic reserve, finds she is desperate to get close to him. Unable to resist Ana’s quiet beauty, wit, and independent spirit, Grey admits he wants her, too—but on his own terms.

Once again, pretty much the same back cover formula.

Cover blurb from The Hunger Games

In the ruins of a place once known as North America lies the nation of Panem, a shining Capitol surrounded by twelve outlying districts. The Capitol is harsh and cruel and keeps the districts in line by forcing them all to send one boy and one girl between the ages of twelve and eighteen to participate in the annual Hunger Games, a fight to the death on live TV.

Sixteen-year-old Katniss Everdeen regards it as a death sentence when she steps forward to take her sister’s place in the Games. But Katniss has been close to dead before– and survival, for her, is second nature. Without really meaning to, she becomes a contender. But if she is to win, she will have to start making choices that weigh survival against humanity and life against love.

That first line is actually a headline. If you remove it from the word count, this one is just 135 words. Let’s see her formula.

As you can see, Collins took a slightly different approach. Re-reading the headline, we see that it serves as an overall appraisal of the book (which is why I included it in the word count). But it comes first. It is concise. And it is designed to pull readers in.

Your fiction cover blurb has to hook people on the protagonist and on the quest.

Ready to write the blurb for your next novel? If not, why not take a trip to your local bookstore and check out a few back covers for inspiration? Hey, it’s an excuse to go to a book store – what’s not to love?

VIDEO VERSION: How to write a fiction book cover blurb for the back of your book