When you really need talent, you can find a creative way to write for your audience. Here are five superb examples of uber-targeted communications.

A friend of mine implored me to fire up The Guardian on my laptop a few days ago, so that I could see a hiring ad.

Puzzled, I clicked on “UK News”.

“Check the source code,” he said.

I did. And this is what I saw:

This is an amazingly clever ad, because it speaks directly to the target market.  It’s not the words that make it so targeted, as much as the placement. They put the ad in a place only coders would look.  And they obviously want to attract curious coders.

It’s like putting an ad for police officers in a doughnut shop.

That got me thinking. Are there any other examples of want ad writers proving how clever they are by uber targeting their workforce? The answer, it turns out, is “Yes!” 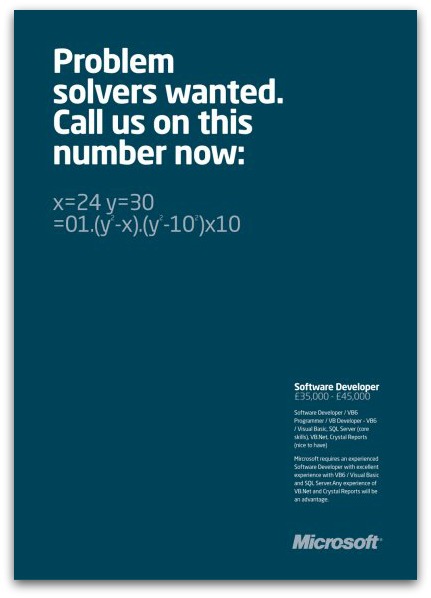 This Microsoft ad shows that if you want to attract problem solvers, make them solve a problem to apply. It’s a great way to do triage.  Anybody who can resist the problem is not whom they want to hire. 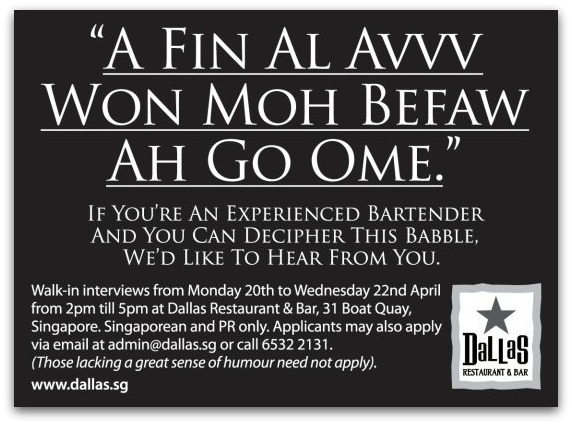 Bar tenders need to be able to understand what overly drunk people are saying. Even when their words are unintelligible. So give them a problem of their own to figure out. Can you read this? No? You won’t make a very good bartender.

Copywriters are solitary people. They site in their corner and swallow pills to quell their anxiety attack over whether to use “whom”, the correct object, or “who”, the colloquial way of saying it. It’s lonely work.

Art directors do pretty much the same thing, except that instead of fretting over “who” and “whom”, they fret over the angle of shadows and how thick to draw the lines. This ad targets the right people, right in the heart. 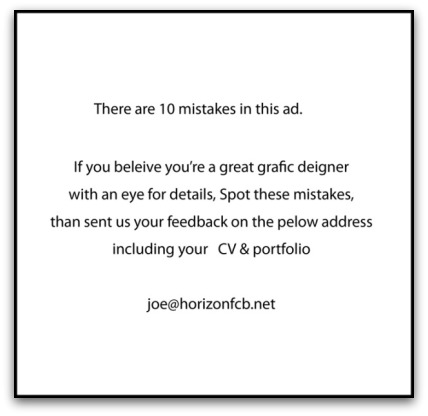 And finally, we have another problem-solving triage ad. If you can’t find the errors in this ad, then you would make a poor graphic designer, an even poorer writer and a completely pathetic editor.

Writing for you audience is very much about understanding the words, the images, the perceptions and the biases that the audience has. It is about using plain language that they can not only understand, but easily understand. And sometimes, it is about the context where you can find your audience or pull your audience out from the crowd.

The next time you seek talent, see if you can find a creative way to stand out from the clutter, save yourself some early triage work and reach your workforce where they hang out.