Can We Talk? What Writers Can Learn From Joan Rivers

Joan Rivers had Botox. Writers have editors. Everybody needs a helping hand to perfect their craft.

“I have become my own version of an optimist. If I can’t make it through one door, I’ll go through another door—or I’ll make a door. Something terrific will come no matter how dark the present.”

Although it’s been a few months since Joan Rivers left us, her legacy and work ethic and career are all worthy of emulation for writers…even posthumously she’s releasing a book. So is her legendary self-deprecating humor. Not that writers have trouble being humble–the rest of the world is more than willing to critique and not pay us (sometimes simultaneously)!

The true genius of Joan Rivers is in turning life’s hard knocks, shocks and Botox (comedy is always funnier in threes) into Emmy gold and worldwide adoration, even “You’re hired” from Donald Trump on “The Celebrity Apprentice.” Ms. Rivers’ had a way of engaging her critics, her targets, and her impersonators.

“All ya need is Botox,” Joan would quip, and it’s true (hat tip to LZ Marie for reminding me.) We need to inject our sagging writing with truth–and don’t be ashamed. We need editors, because let’s face it, the crow’s feet of bad grammar and clunky writing will sink the audition with a publisher or a reader. An ageless classic of literary royalty can get away with anything, but you can’t. You need to Botox your verbiage, Juvederm your just-okay characterization, and Radiesse your readability. This does not mean becoming a carbon copy of the latest tween sensation; La Rivers certainly wasn’t, and she had longevity. 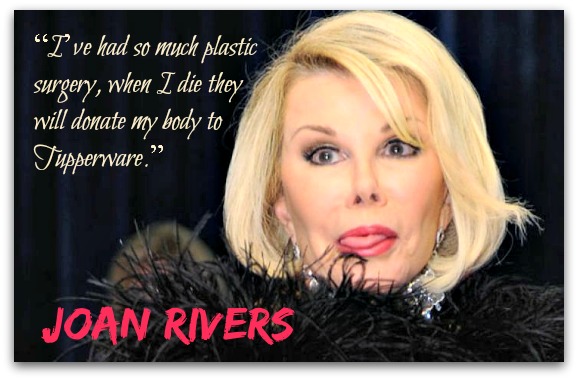 “I’ve had so much plastic surgery, when I die they will donate my body to Tupperware,” Rivers said. Many writers, including your humble correspondent, like to let people believe unfettered brilliance flows from the pen/keyboard. No editing. No revision. As well, people in Hollywood don’t want to admit to dipping into the Botox fountain. No mystique for Joan Rivers about plastic surgery. Everyone in Hollywood has had work done. Writers: Everybody’s book has had work done.

“I can’t wear yellow anymore. It’s too matchy-matchy with my catheter.” Although Joan Rivers made fun of her age, her clever one-liners showed rather than told, and were anything but predictable. Will you ever think of the color yellow in the same way? “My boobs are so low I can have a mammogram and a pedicure at the same time.”

Joan said, “Women should look good. Work on yourselves. Education? I spit on education. No man is ever going to put his hand up your dress looking for a library card.” You may be (a) offended and (b) wondering what this has to do with writers. If you are offended, it means we’ve already learned from La Rivers. For the second reaction, writers should make their books look good. Not merely well-written–the book has to have allure of some sort, even if it’s a book on religion or metaphysics, which is where the education comes in. Have you ever opened 50 Shades of Grey or the Twilight series and said, “I could write better than that”? Maybe so, but everybody is at least opening the book covers of the 50 Shades trilogy (or reading them on eReaders) just to see what all the fuss is about. We’re not suggesting that you make your inspirational memoir sexy or put a vampire in it, but think about the curb appeal for the reader.

Joan says in her documentary “A Piece of Work” as she peruses a blank calendar, “See that? That’s fear.” La Joan felt best when she was working. So do most writers–and we fear the blank calendar of writers’ block, especially when we have a deadline…or no deadline at all. However, just as Joan persevered and sassed her way through life’s ups and downs, you can too.