Write into the woods

Writers can learn a lot by analyzing the successful work of others. Let’s take a look at what makes Into the Woods so successful.

Amateur and budding writers can learn a lot from successful productions, be they books or screenplays. We celebrated New Year’s Day by going to see the movie version of Into The Woods. If you have not seen either the film or a stage performance, you might like to view the trailer below before reading the rest of this article.

People love the familiar and the iconic

Into the Woods is stuffed full of iconic characters. It is almost impossible to decide which one is the biggest icon. Cinderella, or her prince? Little Red Riding Hood? Jack? The Wicked Witch? The Giantess? Rapunzel or her prince? People are drawn to the combination of four epic tails that are etched into our consciousness – yes, deep into our very culture, long before Disney got its hands on the stories.

Simply put, people like to read about what is familiar to them. Have you ever noticed how much more frequently movies feature New York City and London than Chicago and Cairo? Not just a little more – a lot more. And even more amazing, how many times movies set in these places always seem to show the same iconic land-marks.

You can improve your manuscript by including the familiar and the iconic, whether it is in the form of characters, places, legends or some other element.

Yes, Prince Charming is an iconic figure, a fantasy somewhere deep within most women’s dreams, but most women probably also secretly suspect that all that charm covers up some less savory characteristics. And so we see that Prince Charming isn’t so charming after all: “I was raised to be charming, not sincere.”

And the Wicked Witch, while doing her part as the Wicked Witch, is somehow not quite the icon of pure evil-for-evil’s-sake that you might assume. She actually comes across as quite human. She keeps her word when regaining her good looks, granting a child to the baker’s wife. She genuinely seems to care for Rapunzel, and she doesn’t seem eager to hurt anybody without a good reason.

Make your characters real. Give them inner turmoil – something to struggle with. Even two-dimensional characters come to life when they are shown to have the same struggles as real people do (or as real people would in their situation).

People love to cheer for the underdog

Who was the hero of the story? It was the baker. Bakers always seem to feature in nursery rhymes. The baker is the consummate ordinary guy, in this case set with the impossible task for finding the cape as red as blood, the hair as yellow as corn, the cow as white as milk and the shoe as pure as gold…

But he prevails and grows stronger along the quest and learns about loyalty and true friendship and…no, this is not Lord of the Rings. But same idea.

Pick an unlikely hero, somebody who rises to the occasion despite all the external foes. Despite all the internal foes. The thrill of the story is in overcoming the obstacles and discovering that you can accomplish more than you ever thought you were capable of. 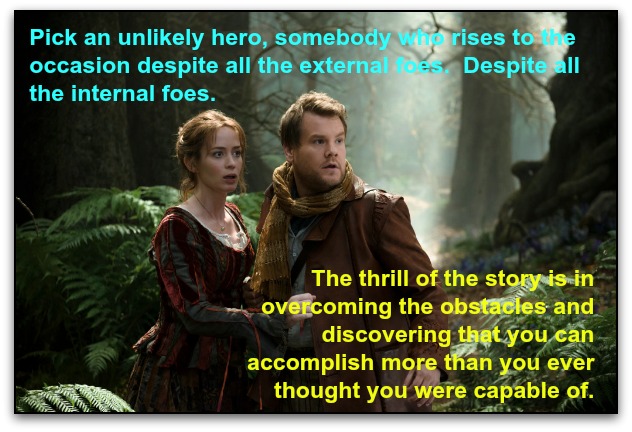 Into the Woods is a musical, and people love to sing along to the songs. That’s because people love rhythm. You don’t have to be writing a musical to include rhythm or cadence in your writing. If you can find a way, do it.  If not, settle for iconic characters in a familiar setting, struggling against both external and internal foes, rising to the occasion and living ever after – happily ever after if they can find a tax haven to settle down in.

Filed Under: Writing and editing Tagged With: characters, into the woods, screenplay, writing tips