What can writers learn from cavemen? A lot, it turns out. Here are a few ways writers can improve their craft by embracing their inner caveman.

You might think we’ve evolved quite a bit since the days when our distant ancestors fretted over coordinating the carpet and the drapes in their caves and still thought fire was a pretty cool gadget.  In some ways, we have evolved.  Take sanitation, for instance.  In other ways, like writing, we can learn a lot from cavemen.


Cavemen always kept it simple.  Of course, they had little choice.  They had no written language, so they had to use pictures to tell their stories.  And since Crayola  had not yet raised enough start-up capital, they had crude tools that took a long time to manufacture and just as long to use.

Keeping it simple, in other words, was as much in the writer’s interest as in the reader’s.  Modern computers make it way too easy to drone on and on at very little expense to the writer, but with possible fatal consequences for the unsuspecting reader. 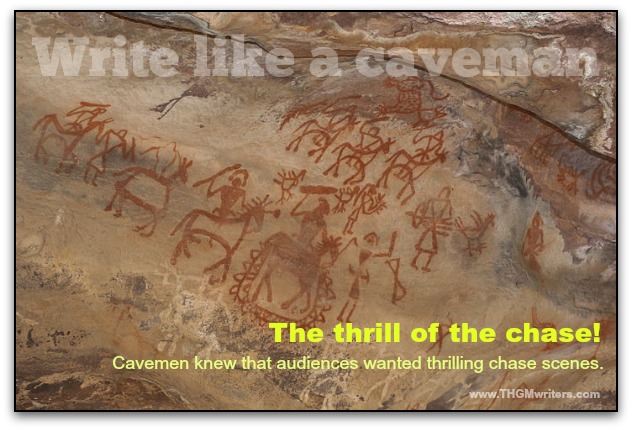 A picture is worth a thousand words

Cavemen used pictures to write their stories.  They could have used words, but they didn’t.  Their stories would have been incredibly loathsome if they had: “Ugh aarngh amphthre bleugh hee.”

Writers need to be able to combine words and images, and to paint images with their words.  Images on a cave wall and images in our minds both help us see what is happening.  By creating a movie inside our minds, we better understand what the writer is trying to convey.

The thrill of the chase

Speaking of hunting, don’t forget to always include plenty of hunting scenes in whatever you write.  Cops hunt criminals, aliens hunt humans and boys hunt girls.  It is a critical plot element.

Chase scenes really worked for cavemen, many of whose hunting stories have really stood the test of time, despite the lack of blaring sirens and explosive car crashes.  Many of their paintings were of stampeding animals, presumably being hunted by cavemen or other animals… although they might just have been stampeding because life in prehistoric times was pretty dull without a little stampeding now and then.  Just as a gratuitous car explosion makes a movie more exciting, so, too, does a gratuitous stampede make a pleasant lazy midsummer’s afternoon more exciting.

Hollywood seems to have held on tight to its inner caveman, but writers sometimes forget the thrill of the chase and the need for gratuitous stampedes.  If your book is about “How to change blades on a circular saw”, you might have a challenge incorporating a hunting or chase scene into your manuscript.

Rise to the challenge

Did someone mention “challenge?”  Almost every manuscript reaches that point where the writer is so frustrated that he wants to heave the manuscript into a forging furnace and watch it burn, with the manuscript still in his hands.

This is a bad, bad, bad idea for two important reasons: first, it would hurt quite a bit (Hadn’t quite thought of that, had you?), and second, cavemen would not be impressed. Imagine what they had to go through to make their inks and somehow form their images.  The pain of writer’s block can’t compare to the challenges they had to overcome just to make ink.

Cavemen understood how to tell a story. Let’s learn from them.

Don’t show all your cards at once.  When cavemen were not drawing in their caves, they were out on the hillside making huge stories that we are still trying to interpret.  Were they stories of welcome to alien races stopping over for a quick drink?  Were they meant to be the ancestral equivalent of epic novels.  We might never learn the truth.  And that keeps us reading.

Write what you know

Write about what you know, and You will always know what you are writing about.

When you know what you are writing about, you can keep it real.  I think archeologists would immediately recognize as a fake any cave painting that depicts a single stick man chasing down a herd of mammoths.

Cavemen told such vibrant stories in their time, even without exploding cars and wookie warriors..  And they left those stories secure in their dwellings, where eons later we can learn from them.  If you want to be a top-notch writer, why not embrace your inner cavemen?  Now there was someone who could really write a story.  And if a picture is worth a thousand words, some of those stories were epic.

Filed Under: Writing and editing Tagged With: cavemen, how to write, writing tips